Air Hitam Dalam is a designated Educational Forest at Sungai Dua on mainland Penang located on the the edge of the Perai River. This park is a rather scruffy remnant of trees and mangroves that punches above its weight in terms of species observed there. One of the reasons for the diversity of species is that it is on a migration route and many interesting species drop in on their North/South travel.

A bund, running north/south essentially runs parallel to the river while the rising sun comes through the trees from the east. 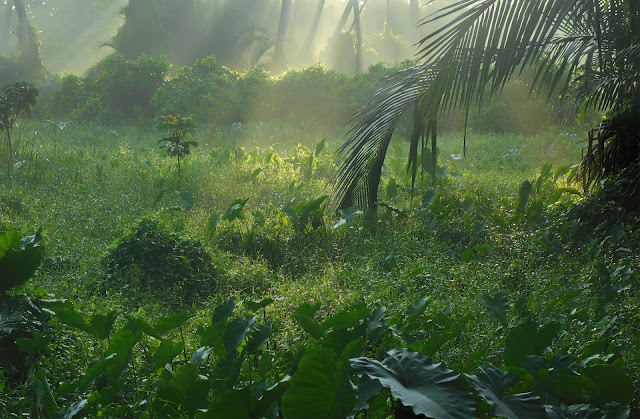 There are resident kingfishers; Collared, White-throated and Stork-billed as well as seasonal Common and Ruddy Kingfishers. There are several groups of monkeys including Long-tailed Macaques and a strange but small group of Dusky Langurs together with a Silvered Langur or two and these two species interbreed.


I have recorded three species of owls over the years; Barn Owls, Buffy Fish Owls and Spotted Wood owls. 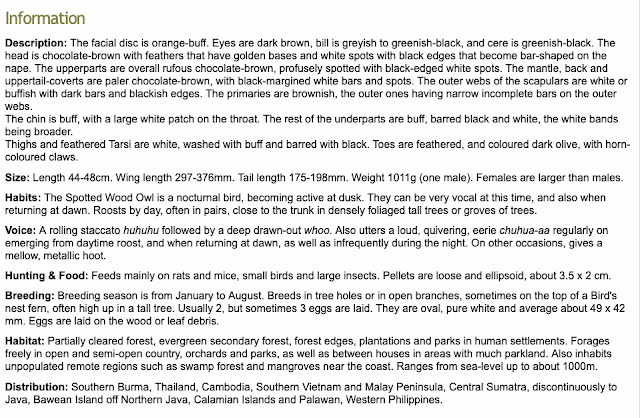 In previous seasons the pair of owls could be seen sitting high up in a large tree. I wondered a number of times where their nest hole could be. Nobody else seemed to know either. I made weekly trips to the forest early in 2019. I had seen a potential hole that was well illuminated by the morning sun.

From a photographic perspective the potential nest hole (centre of the image below) was well illuminated in the early morning but with a limited window. I used 700mm of lens mounted on a sturdy tripod. The limited view gave little warning of  potential action around the hole. 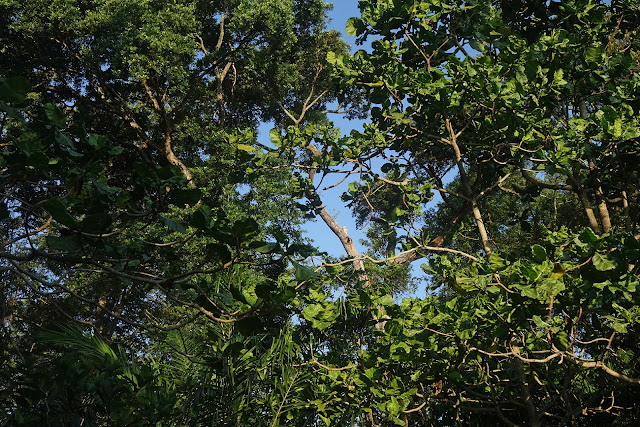 On one visit in March I saw a large bird at the hole looking agitated. I initially thought it was a Crested Serpent Eagle until it was identified as a spotted wood owl. I saw the reason for its agitation....it was trying to shift a large Clouded Monitor Lizard from its nest cavity. As soon as the lizard exposed itself it was repeatedly attacked by the owls in a coordinated manner. I assumed the lizard was raiding the owls eggs. 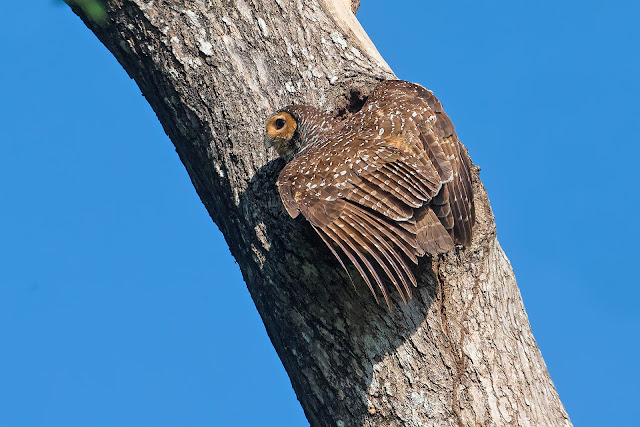 The following three images showing a strafing attack consist of one sequence at 1/10 second intervals. My shooting window through the tree cover was not very large. 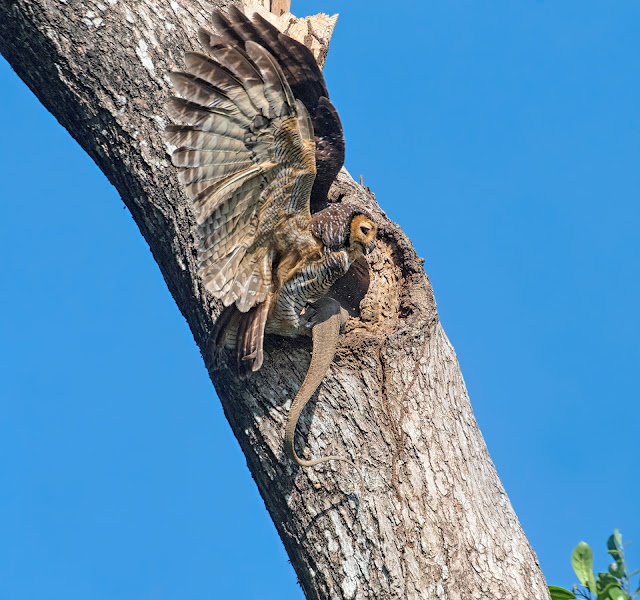 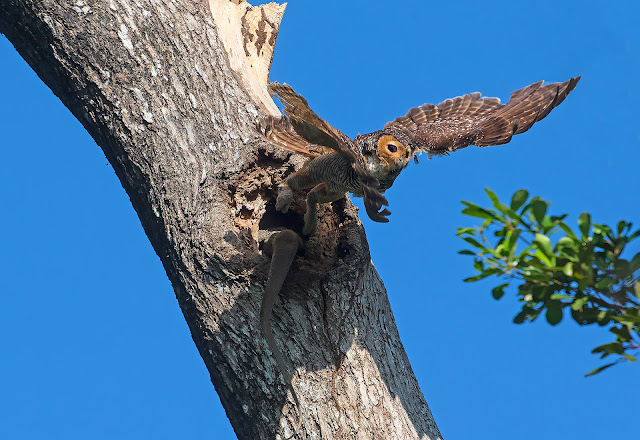 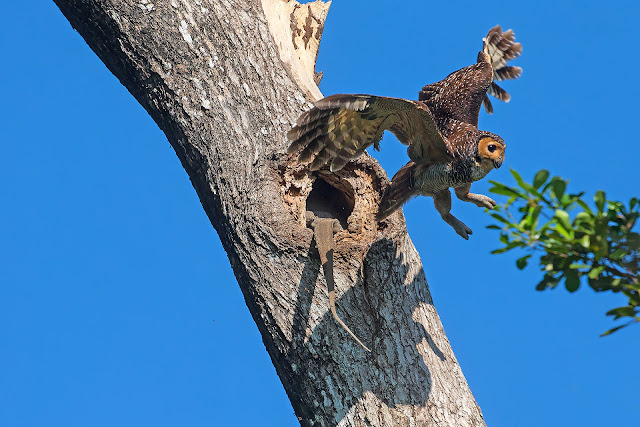 The culprit is now clearly seen. 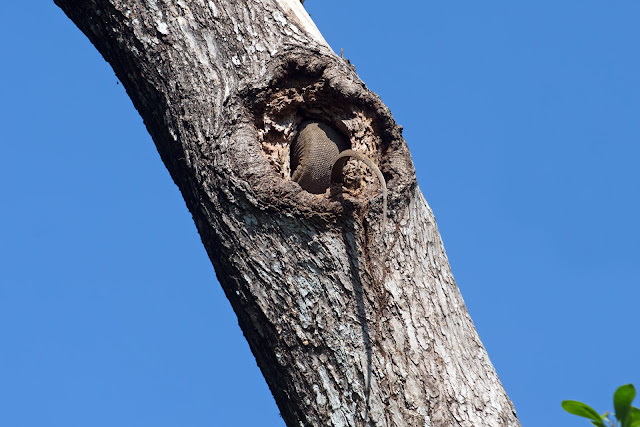 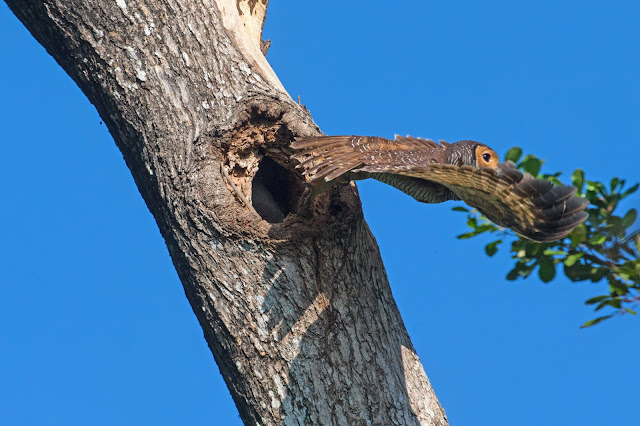 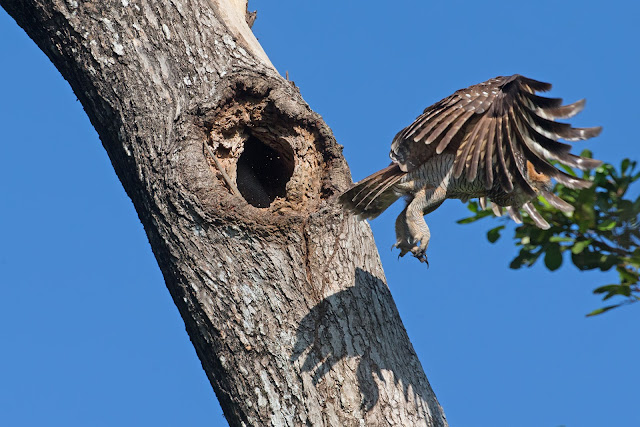 The main mission of my next visit the following week was to see if the owls had recovered from the robbery and had resumed normal nesting activities. For the next three weekly visits the female owl was present in the nest. 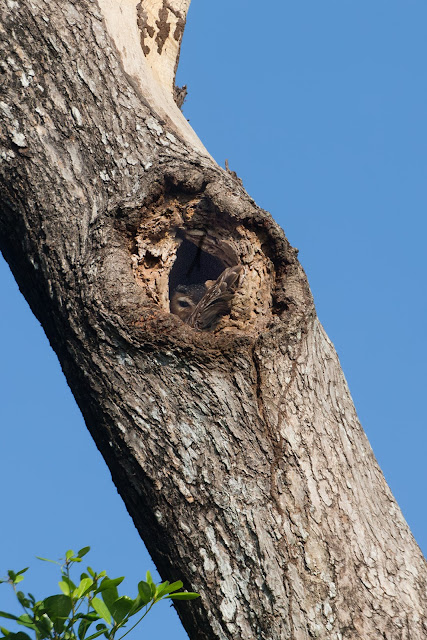 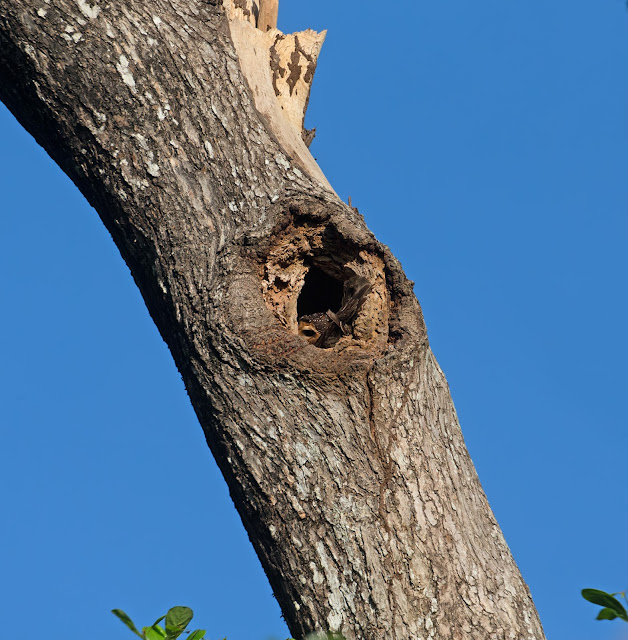 On the next visit the female was not in the nest but I located her in the tree above the nesting cavity. I was hoping to get a shot of her arriving at the nest.

Over 30 days had elapsed since the previous lizard raid.....just enough time for chicks to emerge if eggs were laid soon after the attack. I was a bit surprised after half an hour to see the lizard tail emerge again from the cavity which immediately activated both owls to attack. The attacks were well coordinated, and the lizard was driven off. I thought I could see another tail tip still protruding from the cavity, indicating that there was two raiders.

Monitor Lizards are large lizards in the genus Varanus. They are native to Africa, Asia and Oceania, but are also found in the Americas as an invasive species. A total of 79 species are currently recognized, the Komodo Dragon being the largest. Monitor lizards have long necks, powerful tails and claws, and well-developed limbs. They are seen wrestling in disputes over food, females or territory.

A week later there was no owl on the nest, but I located the female further up the tree. She made no attempt to return to the cavity. I then noticed something further down the tree that  indicated how the lizards located the owl nest even when recognising they sense with a forked tongue. Two lizards were in and around another cavity. Thus the pair of Clouded Monitors had a ‘home-base’ in the same tree as the owl nest. 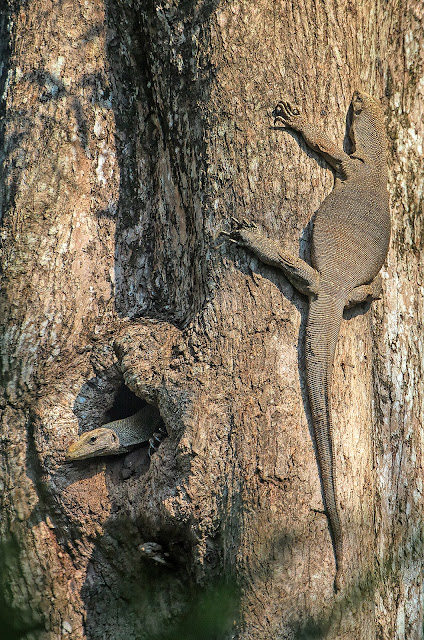 A week later there was one lizard seen initially in the hole and later was observed sunning itself on the side of the tree. 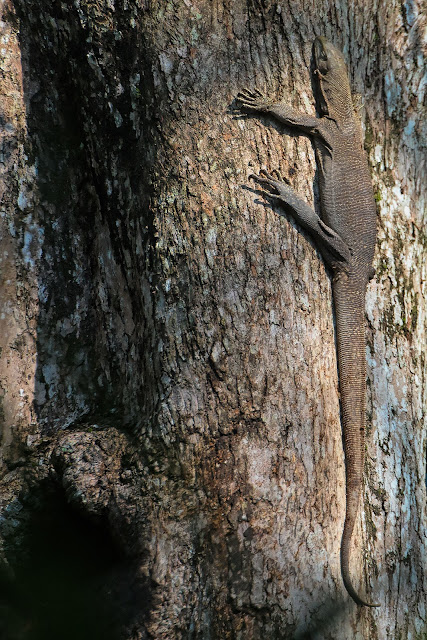 A week later there were no sign of the owls or lizards.

My summation of the whole event was that the owls started nesting normally but chose an ‘apartment’ in the wrong ‘high-rise building’. The owls were not going to have the same scenario again so moved somewhere else. It is a pity because we may not see them back in the same location again.