I am including an account of a nature photographic trip to Darwin and Kakadu in this blog-site as it is a popular area for Malaysians to visit. 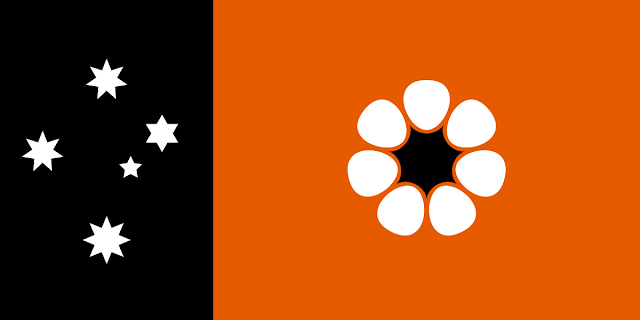 Nature Photography around Darwin and Kakadu

The first thing you need to consider when visiting the northern part of the Northern Territories is that there are two distinct seasons…the dry season and the wet season with periods in between. The period from the end of the dry season to the wet season is called ‘the build-up’. The wet season spans the period of November to April characterized by increased humidity and followed by monsoonal rains and storms Temperatures range from 25-33 degrees C and humidity can be as high as 80%. The dry season from May to October is characterized by warm sunny days, temperatures from 21 to 32 degrees C and humidity levels of 60-65%
Three of us, Nick, Colin and I were in the territory between the end of October to the first week in November………essentially in the ‘build-up’. The advantages of this time are that there are far less tourists around but you take your chances with the rain. The chart below sums up the monthly rainfall and temperatures. 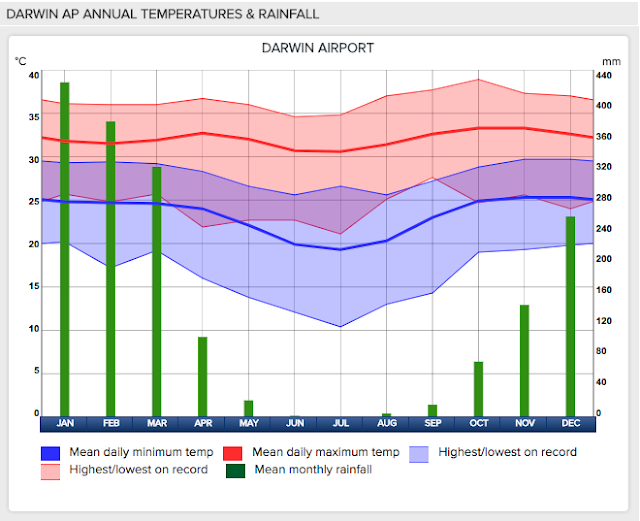 It is best to do photography early and late in the day. It gets very hot in between and can be unproductive and uncomfortable. So get busy early and chill out around the middle of the day. or do yiour driving then in air-conditioned comfort.

We were diverse in our targets from birds to reptiles. We could not obtain the services of professional guides but gleaned useful information from the excellent website of Laurie Ross http://laurieross.com.au/tag/darwin/. We had periods of time in Darwin, Jabiru, Katherine and Batchelor based on Laurie’s written recommendations. We did not stay at Pine Creek but it looked to be more productive than Katherine. 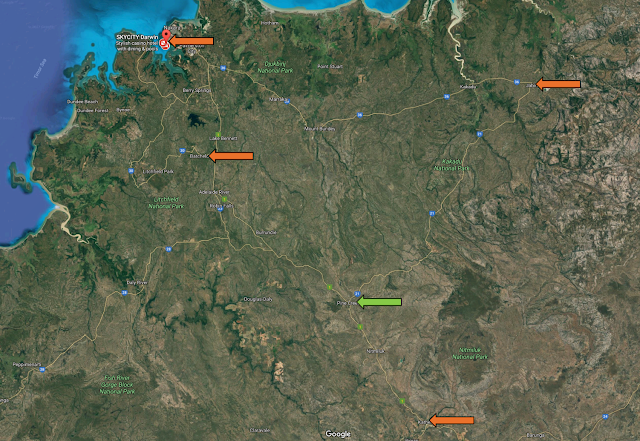 Darwin
We stayed at the Value Inn in central Darwin. The accommodation is well located and the compact rooms are comfortable. There is a bit of a scrum for parking and some of the staff could . do with lessons in customer relations. the postage stamp-sized swimming was unusable with inebriated folk spending most of their time there.  From there we investigated the Esplanade, Charles Darwin National Park, East Point Monsoon Forest Walk, Howard Springs Nature Reserve and Fogg Dam Conservation Reserve. Of these Howard Springs was somewhat productive but the best location of the whole trip was Fogg Dam…..I visited there 4 mornings. (these places are indicated on the map below). Fogg Dam is just under an hours drive from Central Darwin and was developed as part of a failed rice-growing project in the early 1930s. On one visit there we met members of the 'Friends of Fog Dam' and they treated us to a cooked breakfast......such nice people. 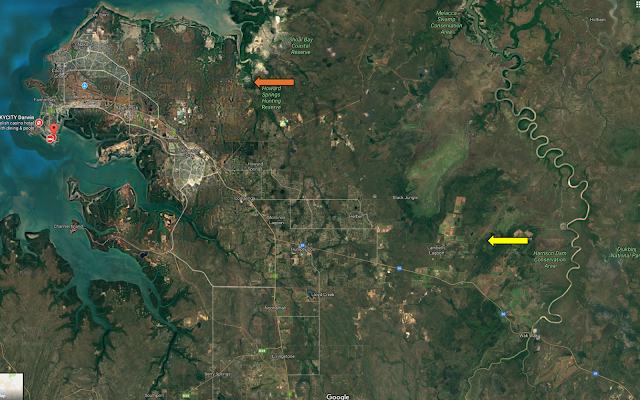 Darwin National Park
This park looked promising but it was hot when we first arrived around 4 pm. Military storage sheds are still in the park as a reminder that Darwin was a target of Japanese bombing in WW2. We did see a mating couple of Forest Kingfishers and a Mistletoe Bird. The latter is quite hard to find and is dependent on mistletoe that is regarded as a pest  and destroyed by gardeners. 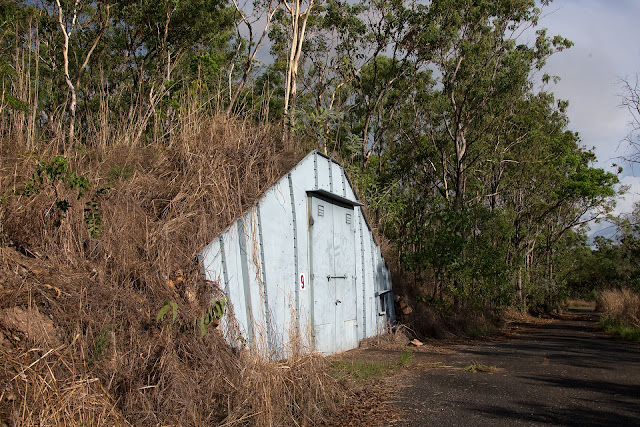 Howard Springs
I targeted the Rainbow Pitta at Howard Springs but instead got some good shots of an amorous Brahminy Kite pair.

Fogg Dam
Fogg Dam was a great place to see many of the 200 bird species recorded there. There are water pythons and crocodiles too. Walking on the dam road is not recommended as crocodiles can decide to rest there…..but this location is ideally suited to shooting from a vehicle with the close proximity to wetlands on one side and grasslands on the other. I even achieved a full frame shot of a tiny forest kingfisher using the car as a mobile hide. There were a number of Magpie Geese flying around. They were the main target of shooters and the shooting season has started a few weeks prior to our visit and gunfire could be heard not far away.
Fogg Dam is rated as one of the top 10 places in Australia for bird-watching.


There are warning signs at the entrance to the dam warning folk not to walk on the road on the dam. It looked harmless enough....mostly.....but there was the odd 'lizard' warming itself. 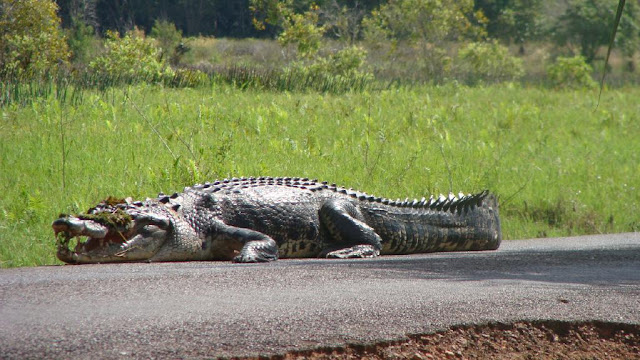 There are several boat operators offering cruises and self-drive boats at this location. However they were closing for the wet season and the boat hire hours are not friendly to nature photographers. 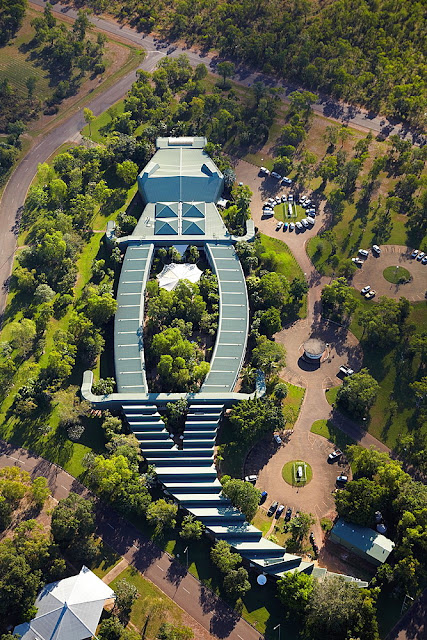 Across the road from the Thai restaurant is a colony of Black Flying Foxes that start to get restless in the late afternoon before flying off at dusk. This species is confined to the northern edge of Australia. 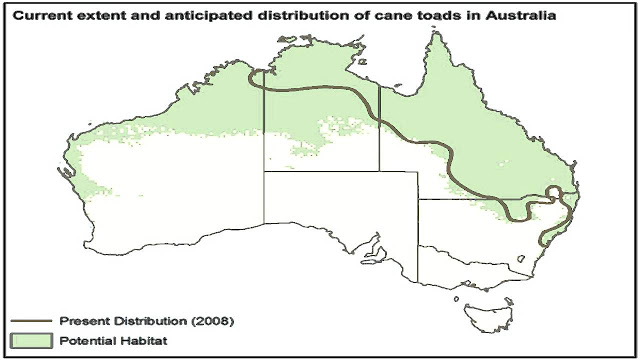 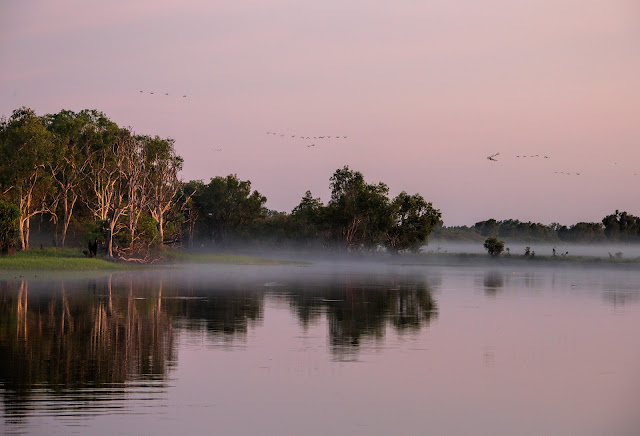 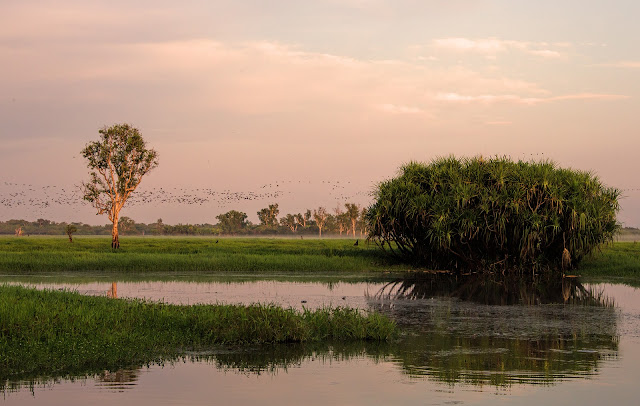 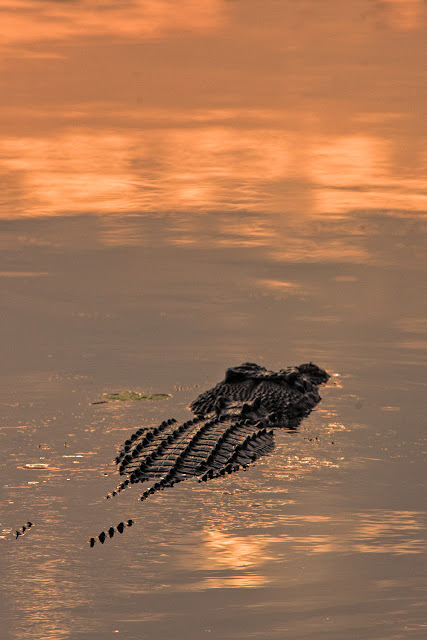 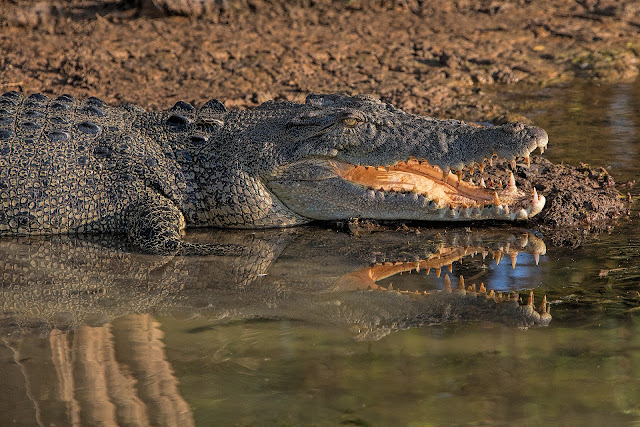 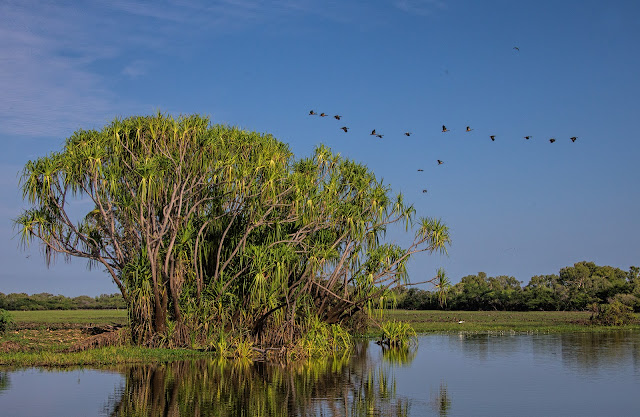 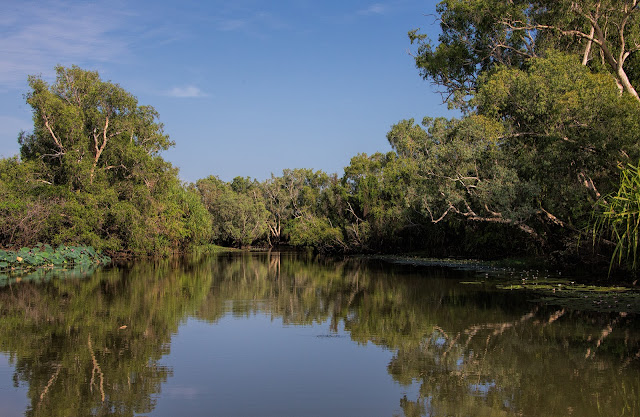 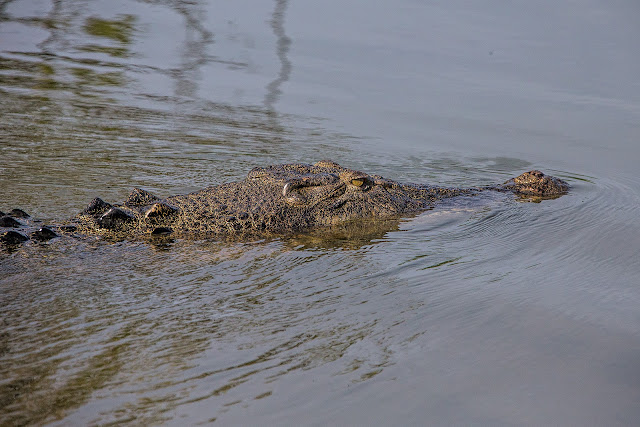 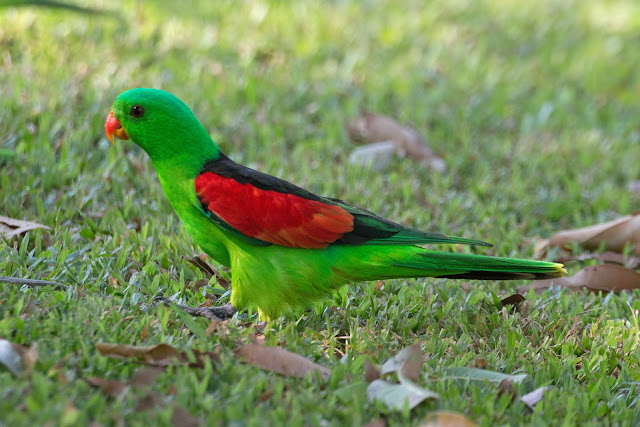 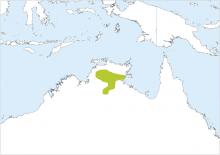 At Pine Creek we also saw the elusive and turbo-charged Hooded Parrot. This species has a very limited distribution as shown.

Batchelor and Litchfield Park
We stayed 2 nights in comfortable cabins at a camping ground in Batchelor, which is a small, leafy town with a nice friendly pub. The proprietor of the camping ground fed the native birds in the morning and evening but generally the whole area seemed somewhat devoid of our feathered friends. 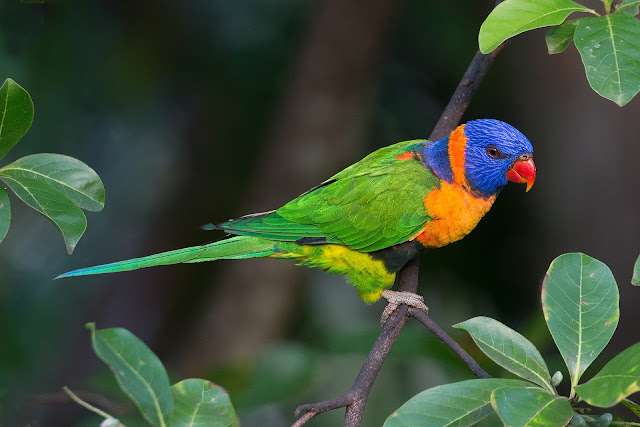 The main features of Litchfield National Park are the magnetic termite mounds and several waterfalls.
The magnetic termite mounds are the home of Amitermes meridionalis which is a species of termite endemic to Northern Australia and the common name derives from the fact that the wedge-shaped mound is aligned with its main axis running north and south. A field of these mounds looks like a church graveyard.. The mounds may be 13 ft hight and 8ft wide and 12-20 inches through. Te nests are laterally flattened and are oriented so that they receive the warmth of the sun ion the eastern and western sides respectively in the morning and evening. The interior temperature remains relatively stable with high humidity. 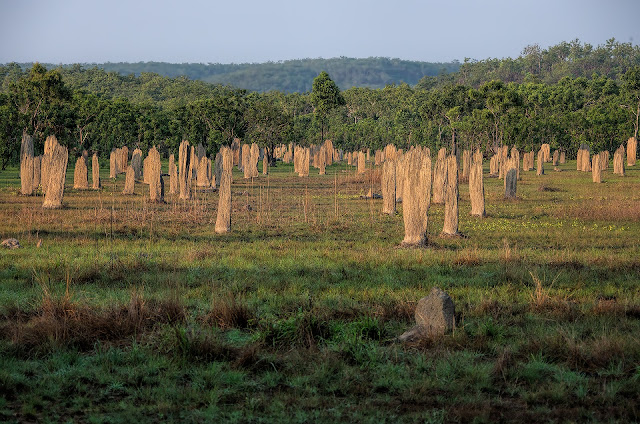 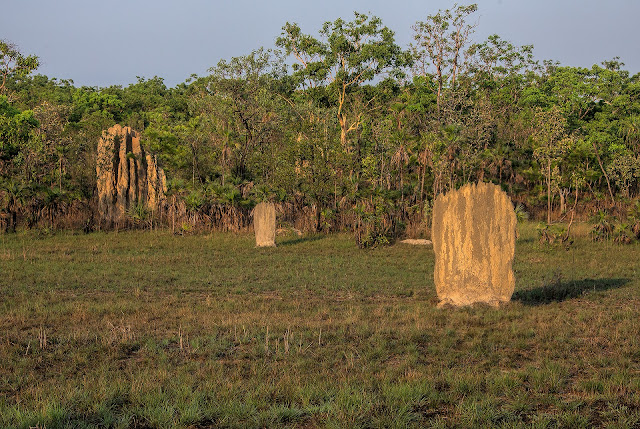 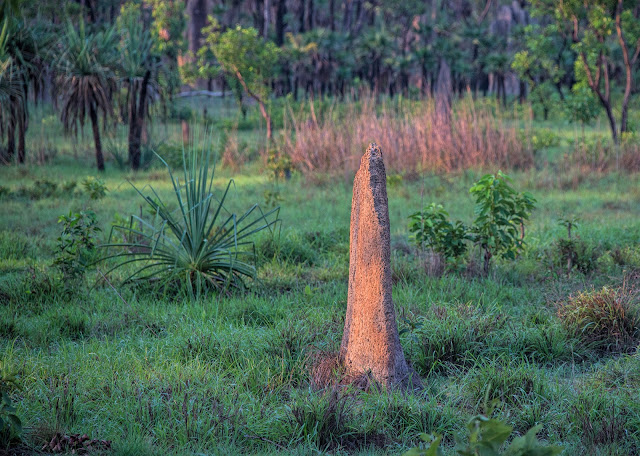 Litchfield National Park is also renowned for its waterfalls and swimming holes. The falls depicted below are Florence Falls. 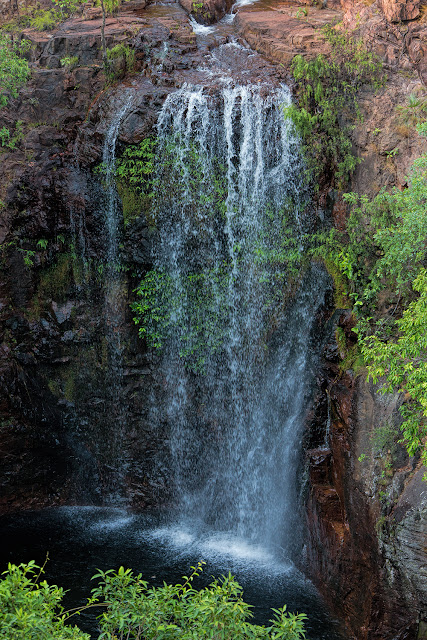 Back to Darwin and summary

Litchfield National Park and Batchelor are OK but a bit devoid of wildlife.The parks around Darwin were a bit dry but for some target species the services of a professional guide are desirable but of course these are an added expense. Again Laurie Ross has an excellent website with GPS locations where various bird species are found.


There are two species which would be on my target list next time I visit.....these are Gouldian Finches and Rainbow Pittas. Both of these species are thinly distributed as shown below but centred essentially around Darwin. (Library images used) 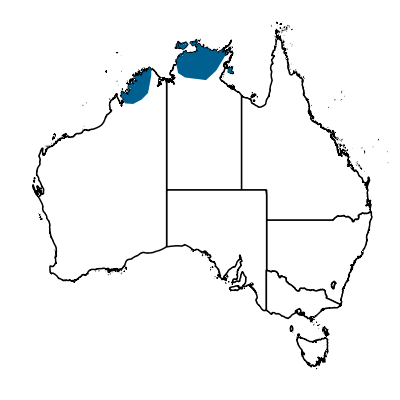 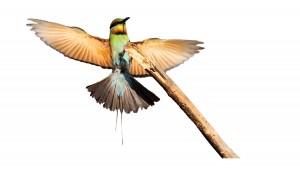