Chestnut-naped Forktails (Enicurus ruficapillus) are a member of the flycatcher and chat family Muscicapidae. The species was originally placed in the Thrush family, Turdidae but were recently replaced in the Muscicapidae, the Old World flycatchers. All the birds in the Genus Enicurus have long forked tails.

There are other members of the flycatcher family in the adjacent forest.

The Chestnut-naped Forktail is 18-20cm and weighs around 27g, The head of the male is Chestnut coloured, with a white forehead and black mask in front of the eye. The wings are black with a white wing-bar. The breast is white with black barring, fading towards the white belly. The rump is white and the tail is black with white stripes and a white tip. The female is the same as the male except the back and mantle is chestnut. The forktail calls in flight, either a single or three high-pitched whistles.

The species is known for its extreme shyness and blinds are usually necessary to get close images. This small insectivorous bird is localized throughout southeast Asia (shown below), being found in subtropical moist lowland forests and lower montane forests (up to 1300m) with swiftly running rivers or streams. They feed on insects amongst the rocks alongside these streams and next to small streamside pools. 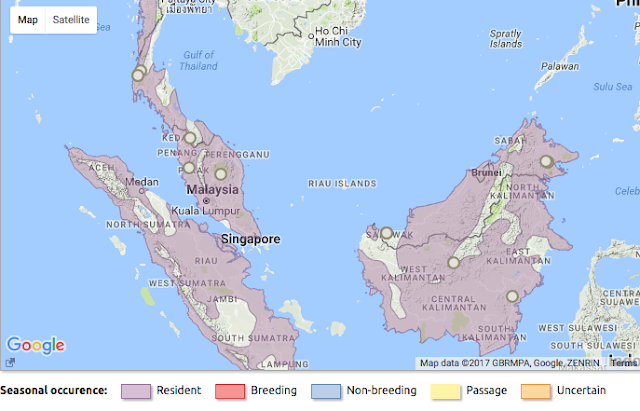 The following observation occurred at Hutan Lipur Sungai Sedim, a recreational forest about 30km northeast of Kulim in Kedah, Malaysia. Sungai Sedim, which flows down the hills of Southern Kedah, is a tributary of Sungai Muda. I was staying with Nick Baker from Singapore and Andie Ang came with us to study the resident population of Banded Leaf Monkeys. We stayed at the Sedim Rainforest Resort where the food is good and the staff very friendly.


I went down to the river as the sun gathered some heat to see if I could capture the Forktails. I saw a flash of white across the river…..it appeared to be the male forktail. He was restlessly perched on a relaxed U-shaped vine in the shadows on the other side of the river.
I had no way of getting closer so set up my 500mm lens with a 1.4x extender…..giving me 720mm of glass. My exposure parameters were ISO 2000, f5.6-f8 at 1/80 to 1/100 sec……..in other words I was on the edge both with distance and exposure and restricted in terms of freezing action. To make things more difficult Chestnut-naped Forktails flick their tail up and down repeatedly.


The female was not in sight. The male appeared to go into a form of courting behavior on what seemed to be his lek or stage. He stalked and pranced over the extent of the vine 3 times and for a while appeared to do a Michael Jackson moonwalk. 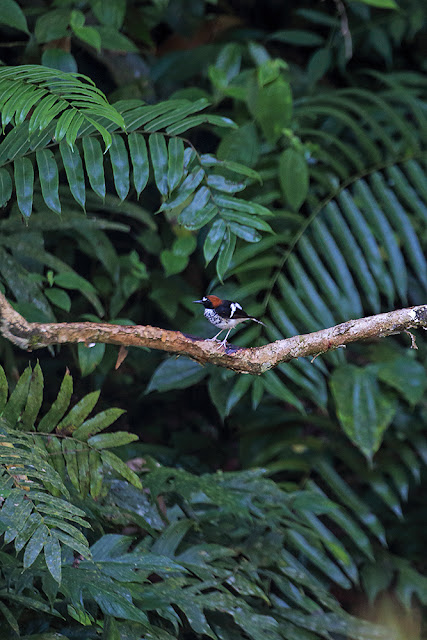 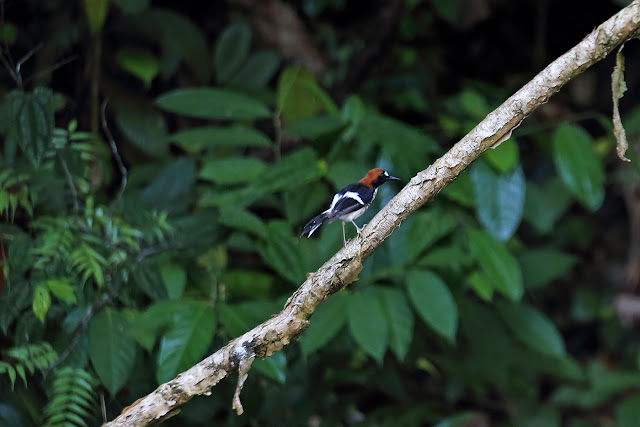 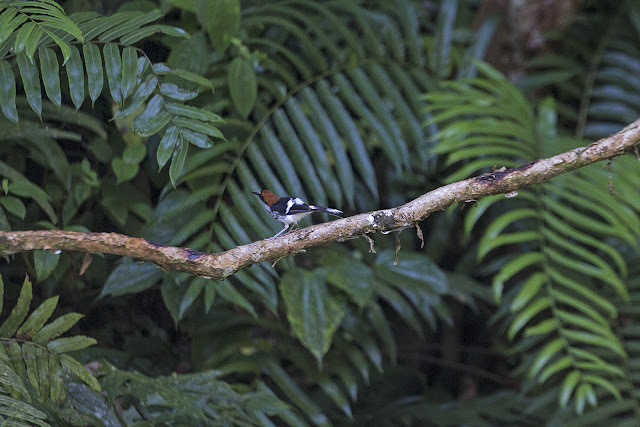 He also had a bowing maneuver. he repeated often . 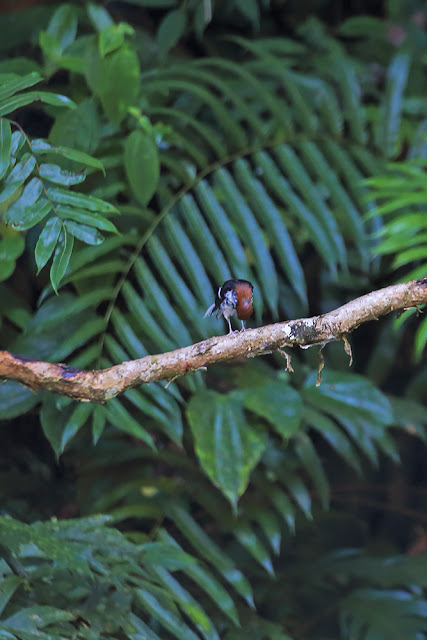 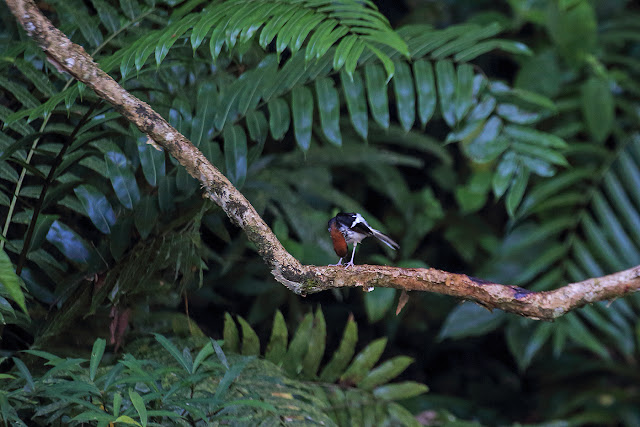 He left the branch briefly several times but reappeared to resume his ritual. After about 15 minutes the female flew in. Several times she presented her derriere to the male with uplifted tail. He inspected but appeared not interested. 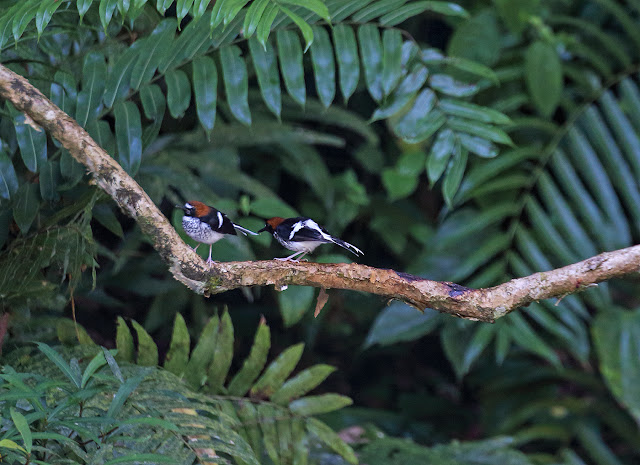 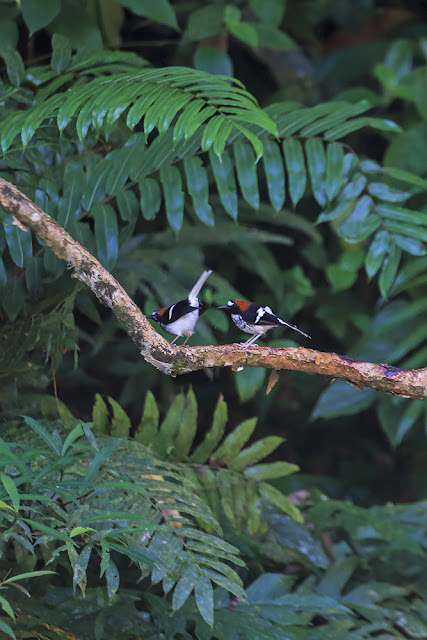 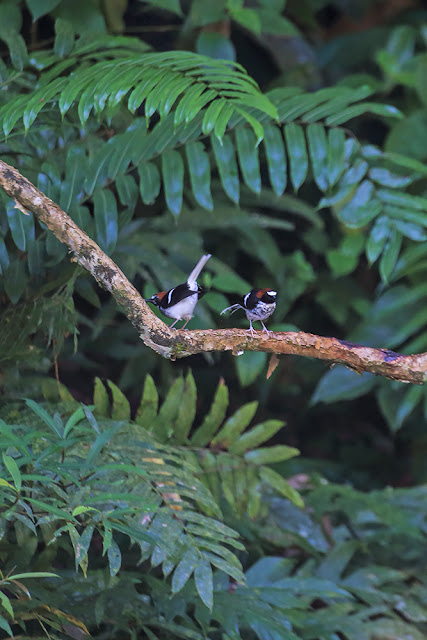 The pair left the vine together and he had a bath while she observed. 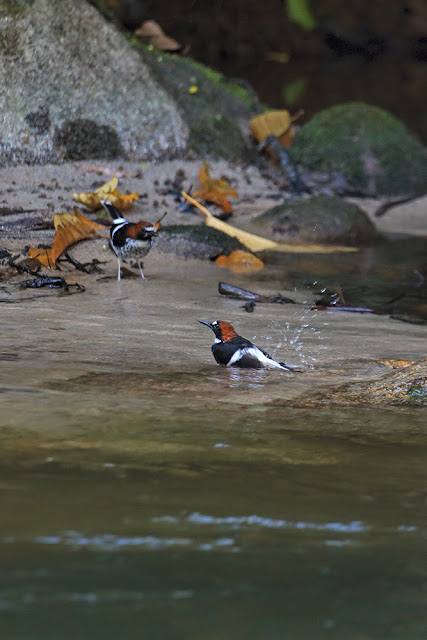 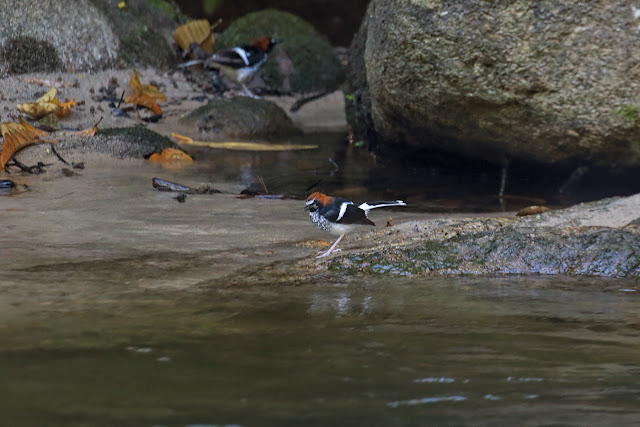 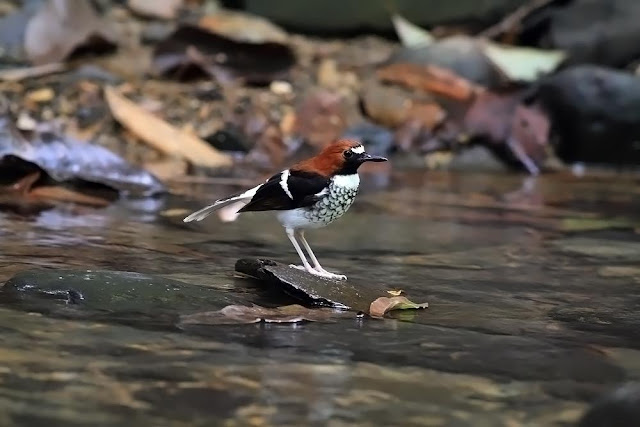 The pair came close together on the rocks again and the female presented her rear again....alas the male again appeared disinterested. They then flew downstream and were seen foraging on the riverbank. 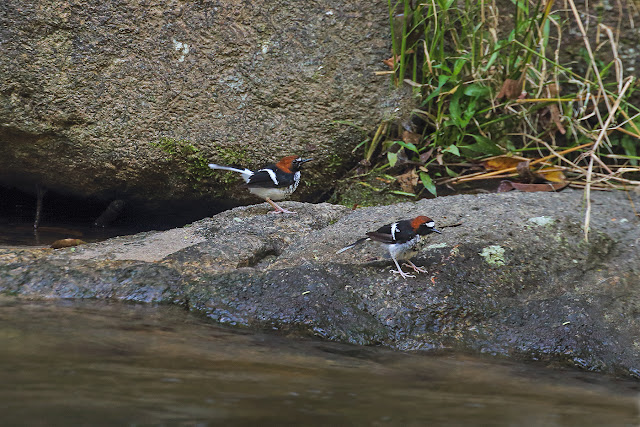 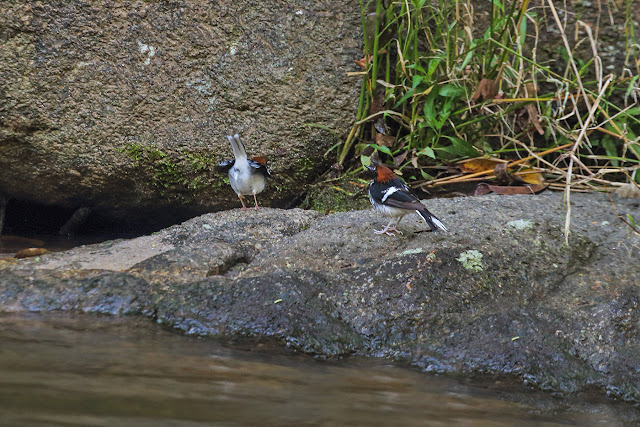 I would be interested to hear if any other photographer has witnessed this type of courtship display.

An excellent video showing the species can be found here

Additional information on Chestnut-naped Forktails can be found here