In the last 27 years I have likely visited Fraser’s Hill around 25 times. I have seen it become less popular for visitors as other locations compete. Several attempts have been made to rejuvenate accommodation and increase tourist numbers. The Jelai Highlands Resort was the place to stay for birders and nature lovers. It closed over 5 years ago and it continues to sadly decay. It was a photographer’s focal point because the carpark lights left on during the night attracted moths and insects and birds harvested these in the early morning. 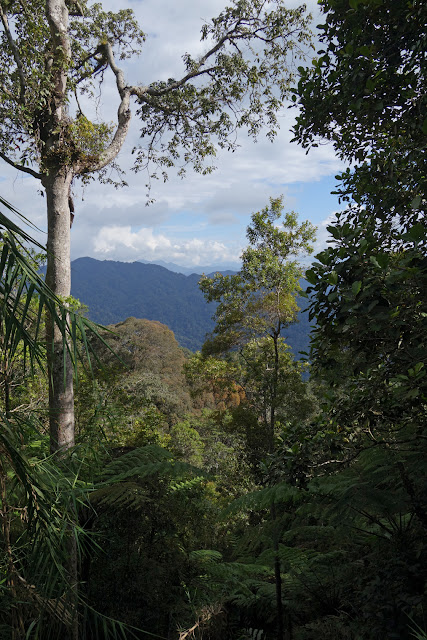 Fraser’s Hill with its cooler temperatures, unspoilt forest and many walking trails is still a great place for nature lovers but the problem was where was it best to stay to appreciate such beauty. Over two years ago Stephen Hogg and his wife started ‘Stephen’s Place’, essentially a refurbished bungalow that has 4  double bedrooms and offers bed and breakfast plus dinner for an additional fee. I wrote a review of Stephen’s Place in early 2015. I have stayed there three more times since then and write this updated version.

Stephen and Salmiah and their two boys Adam and Daniel are now well entrenched in this hotspot for nature lovers in Fraser’s Hill.  Stephen is a very experienced photographer and has vast knowledge of the natural world. He had a related business in Brunei and is an expert on snakes, spiders and moths. Stephen has species of spiders named after him and is currently producing a book on regional moths. He is an expert also on camera trapping and assembles his own units. He is well versed also on the use of flashes in high-speed photography. He also pioneered the use of drones for photography many years before it became trendy. Stephen speaks in a refreshingly forthright manner but has a good sense of humour. He can entertain for hours with many stories of his nature adventures. On a humanitarian note Stephen has worked in conjunction with medical scientists to extract venom from certain local snakes to produce anti-venom to protect patients from the worst effects of species-specific snake bites.


Stephen’s Place is now reserved  for nature lovers and is booked well in advance by many international experts. I now realize that staying elsewhere in Fraser’s Hill is a superficial experience and it is better to embed in the natural heartland. Stephen’s Place is situated on the Telecom Loop (Jalan Girdle) that was always popular with birders. Several times tiger roars have been heard, otters have been spotted at the foot of the drive, owls call at night and squirrels congregate in the surrounding trees. It is a place where the most interesting and exotic bird species seem to pass through at some time. There is also irregular night visits by several species of civets with the star being 'Bob' the Masked Palm Civet.

During a visit in early February 2016 I noted the front lawn attracted a number of squirrel species but there seemed to be a lack of birds ….even the common species that are synonymous with highland hill stations. This has all changed and the front yard is now bird station central. I believe this change has been brought about by the relocation of the moth sheet to the front yard. Special veterinary treatment lights that have a suitable spectrum of emissions have been installed to attract moths. This is part of Stephen’s moth species project but the associated white moth sheet attracts many species of birds, bats and squirrels for a morning feast on the moths. 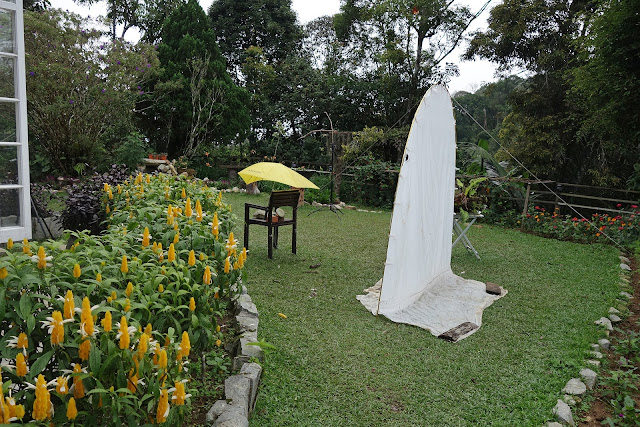 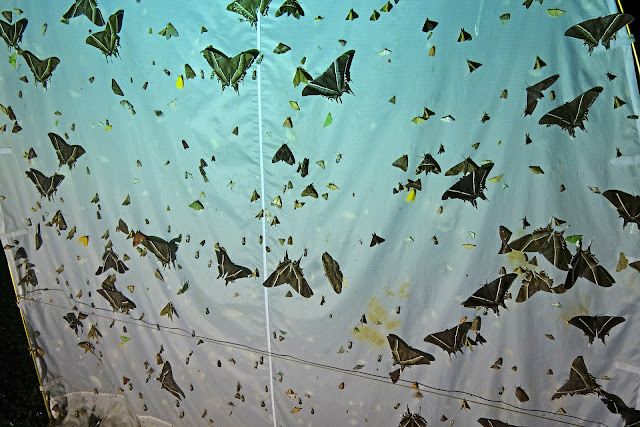 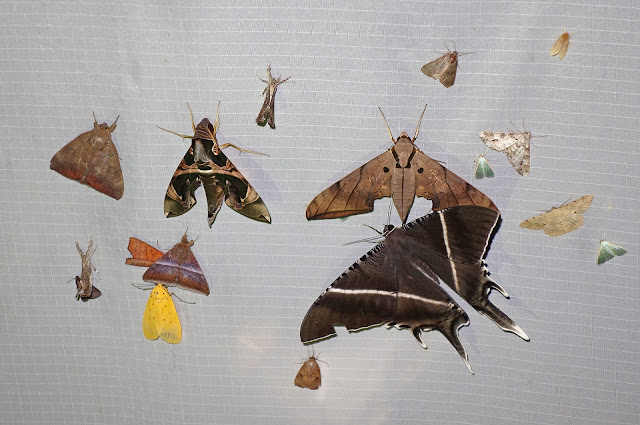 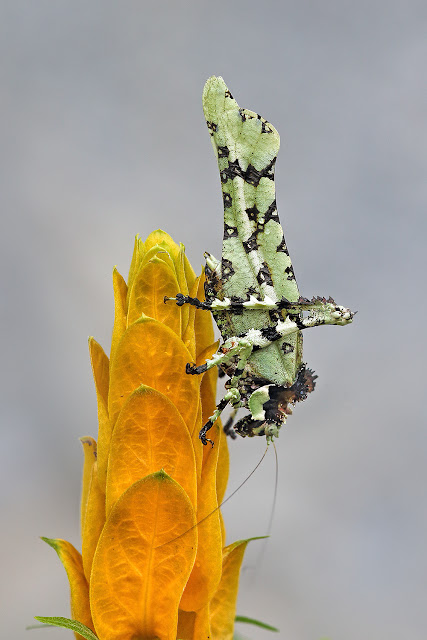 A pair of Green Magpies have been making irregular visits in recent weeks and glimpses were seen of Crimson and Black Orioles. Less visually spectacular Babblers and Flycatchers are constant visitors to the garden. For those wanting a photographic challenge there are many Black-throated sunbirds on the garden plants.

There are also visits of the lawn by Short-tailed Gymnures......a species that until this year I had never encountered. Gymnures are most closely related to hedgehogs.


There seemed to be a lot of feeding of juveniles around the front lawn and feeders on my recent visit (July 2016). Silver-eared mesias and Magpie Robins were feeding fledglings  while unexpectedly a Chestnut-capped Laughingthrush was feeding a juvenile large Hawk Cuckoo....quite a lot larger than its own offspring. 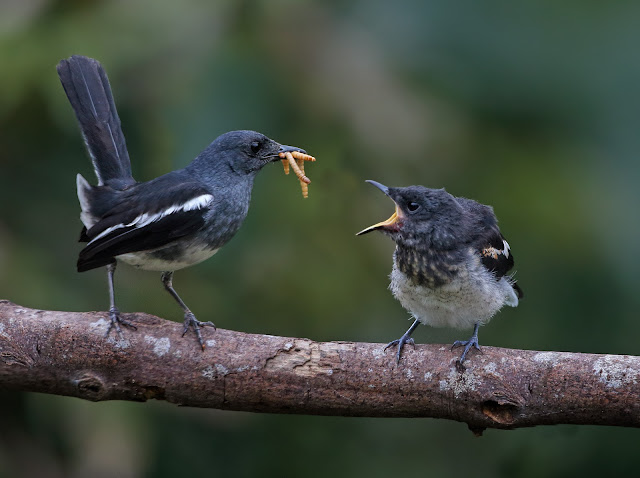 Not all bird species seek a moth breakfast but the garden has been planned to attract other birds such as the Streaked Spiderhunter. The location of the house also seems to be on a bird transit route as we had Red-headed Trogons, Long-tailed Broadbills and Grey-chinned Minivets passing through. For a period the Red-bearded Bee-eater was around when nesting nearby.

During the recent workshop held at Stephen's Place an epic shot of a male Rufous-Bellied Eagle eating a Sultan Tit was captured by Chee Wai Fong as he walked the Telecom Loop.


There are a number of primate species in the Fraser's Hill area. In my visits to Stephen's Place White-thighed Langurs have always been nearby. They even raid the garden if they can. Elsewhere I have recorded Siamang as they transit the treetops and provide the haunting call at dawn.

A stroll around the Telecom Loop can also be fruitful for the observant nature enthusiast. The mossy banks host Trapdoor and Funnel web spiders and various lizard and gecko species. Funnel web spiders have their own story....a very ancient species they remain hidden under the trapdoor until a prey touches the radiating silk threads. The spider launches a quick attack knowing how big the prey is by how many threads were disturbed. They even cultivate moss on the trapdoor lid to add to the deceit. There are also varieties of snake species in trees, leaf litter or drains. Rounding a corner may reveal a perched Blythe’s Hawk Eagle or the large Mountain Imperial Pigeon. Fruiting trees attract many species of Barbets with their insatiable appetites. There are many Woodpecker holes in dead trees and sometimes a head pops out of one indicating it is in use.  Sultan Tits unzip hairy caterpillars and raptors glide overhead. Several species of hornbill are seen in the forest but their call should not be mistaken for the geese that Stephen keeps as ‘watchdogs’.

The host's house has a large lounge and dining room. A lot of the food served is locally grown; the garden produces tomatoes and beans, chickens provide the eggs and delightful sausages are made ‘in house’ and the hosts also smoke fish for their guests. The food is top class and the often hidden hero here is Salmiah.

The bedrooms are large and well appointed. Phone reception is generally very good but visitors must arrange for their own internet connection. I use a ‘Hotspot’ device with a data card and several people can use this at the same time. Take care to purchase a card from a good provider. I found Celcom to have very irregular service in the location. It must be remembered that the house is not a hotel and you are a guest in the host’s family house. The cost of the stay and meals is in my opinion very reasonable…….I will not list it here as it may change in time. Both boys are involved in nature and photography and the eldest, Adam is likely to be the next David Attenborough.

The Nature Photographic Society (Singapore) recently organized a workshop at Stephen's Place.....it worked well and the hosts were excellent and accommodating....even coping with changed dietary requirements. Illustrated talks were possible by connecting a laptop to the host's large TV screen. 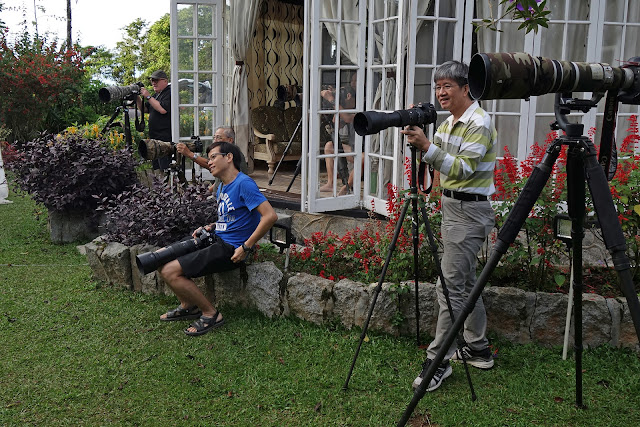 What is the best time of the year to visit Fraser’s Hill? There is no simple answer to this question as the kaleidoscope of nature changes constantly. The hill is in the main spine of uplands that runs down the centre of peninsular Malaysia. Unlike Penang the weather is influenced by both monsoon systems and it can change rapidly. Hill mist can be a problem and it dances provocatively around the photographer just as a pursued species come into sight. I have had my best haul of images in February but have also had days curtailed by rain in the same month. In short; all months can be good but each month may also have rainy days that confine you indoors. Nature comes without a guarantee. 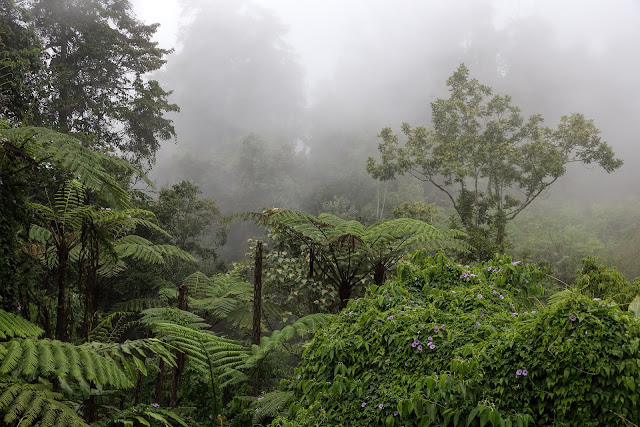 From the base at Telecom Loop is is also easy to access other birding hotspots for select species. A Hill Partridge family was recently located near Richmond House and  fruit-seeking Fire-tufted Barbets obliged photographers at the Jelai Resort carpark. In the nesting season Silver-breasted Broadbills have been seen around the Jeriau Waterfall area.

My wish for Fraser's Hill in the future is that it is preserved for nature lovers and does not resort to artificial entertainment. It would be good to see other centres for nature lovers.......... just like Stephen's Place 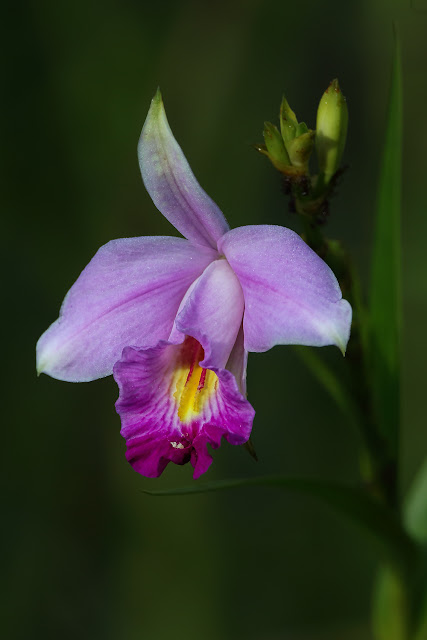