Getting there
The Farne islands are located off the Northumbrian Coast in the North East of England. They are positioned  between the fishing village of Seahouses and the Bamburgh Castle and can be accessed from Seahouses. There appears to be several boat operators, the main one being Billy Shiels Boats http://www.farne-islands.com/


They offer various trips including diving trips but for the serious photographers there are two possibilities;

1. An approximately three hour trip that leaves at 10.00am from the Seahouses boat harbour. This trip cruises around the inner and outer islands and lands on the large Staple Island and is there for an hour before returning to base. The fee for this trip is £15.00 for the boat and £6.80 to land on Staple Island.

2. An approximately six hour trip that leaves the Seahouses harbor at 9.30am and allows two hours on Staple island and another two hours on Inner Farne Island. This would entail you take a packed lunch.

There are National Park ranges on both islands and it will cost you  £6.80 on each island unless you are a member of the National Trust
The boat fee is £35.00…so it is a relatively expensive day at £48.60 for the day. You had better choose a good day because a repeat trip would make it expensive shooting

The boats are run efficiently, the commentary is good and care is taken to get the passengers on and off safely. There is a booking office in the village and another booth near the docks. You can book ahead but also on the day when you see what the weather is like. Some personnel in the booth were rather curt in their behaviour but it was generally OK. The boats are open to the weather so wear plenty of protective clothing that is waterproof and warm.

For various reasons and considering and the weather forecast I opted for two morning sessions on Staple Island. The only difference between the two islands is that there are Terns nesting on the Inner Farne Islands and that is also a mixed blessing as they can attack you with some passion. 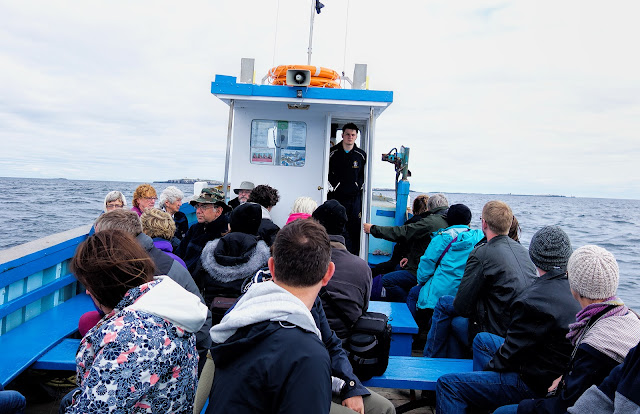 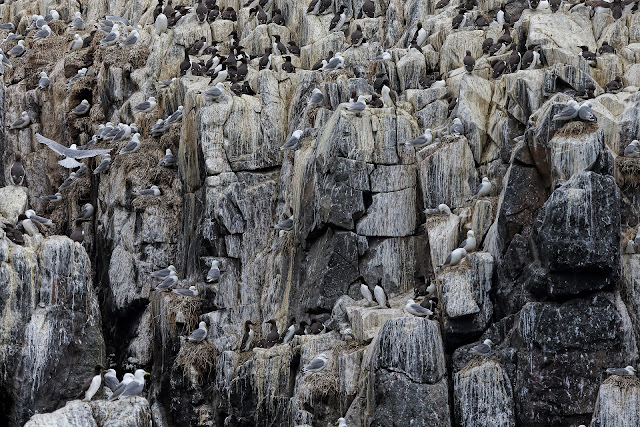 Accommodation
I was there in late June 2015 and accommodation in Seahouses was difficult to obtain. It appears there is possibly not another reasonably cheap accommodation in the area so you need to book ahead. This dictates when you have shooting time on the islands also. My wife and I stayed at the Links Hotel. It was adequate with off-street parking but the room was small and the door to the en suite toilet did not close properly. Breakfast was ordered the night before and was adequate. There are a number of fish and chip shops in the town and what we had was only ordinary. You would expect more at a fishing port.


Equipment
I was on a long trip and had baggage restrictions so did not bring my telephoto lenses or tripod. There were a number of photographers on the islands that were ‘heavily armed’. On advice I took my Canon EOS1DX camera and 100-400mm lens. I also packed my 28-300mm lens but did not use it.  For wide angle shots I had my trusty Sony RX100Mk2

Shooting conditions
It is always best to have a plan when going out into the field. I was primarily interested in shooting the Atlantic Puffins. I wanted shots of them flying, preferably with cargo. The second option was to get shots of them on the ground with beaks full of sand eels. The first day was overcast but the sky opened up at the appropriate time and enabled flight shots. This is turbo skeet shooting. Puffins have an all-purpose design; they have short wings that act as flippers when they are fishing at seas. They are not the best fliers and dart through the air in a straight line with very fast flapping…300-400 beats per minute.  I prefer frozen wings on flight shots (not everyone does) and I found that 1/3000-1/4000 was inadequate to freeze the wings. I managed to get good shots on a few occasions at 1/8000, f9 and ISO 100.
Most incoming Puffins had cargo of sand-eels but they dart all over the place like tubby tracer bullets. To build their nests they burrow into the softer dirt amongst the vegetation and the whole nesting area looks like Hobbitville. Herring and Black-faced Gulls lurk around the nesting site to mug the incoming providers. Most puffins land on the run and are in their holes within seconds. Watch out for the ones that can’t quite remember where their burrow is as they make great models.
The best shooting condition is hazy sun. There is a lot of white on the puffins and this can easily blow-out in harsh sunlight. You are also on the islands around the middle of the day when the light is less than ideal.
On the boat you can get also close to swimming birds and get interesting take-off shots as they churn the water before becoming airborne. 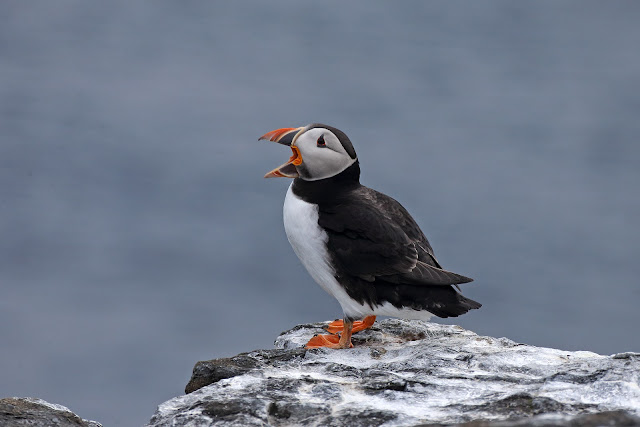 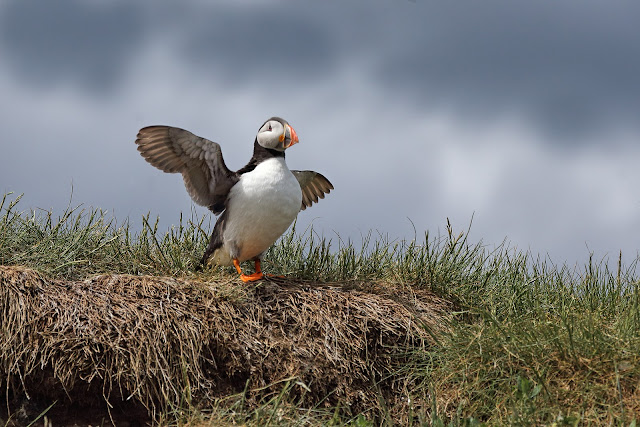 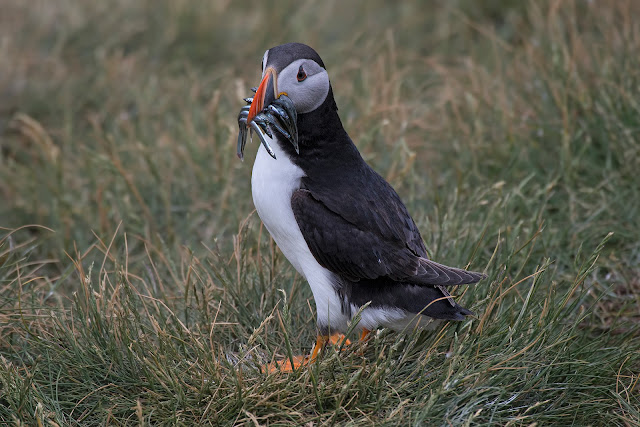 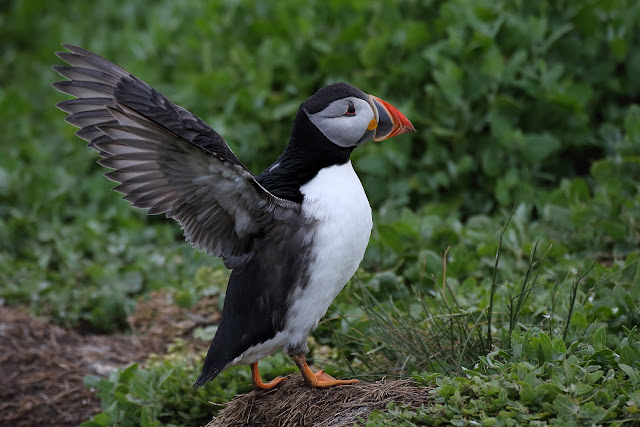 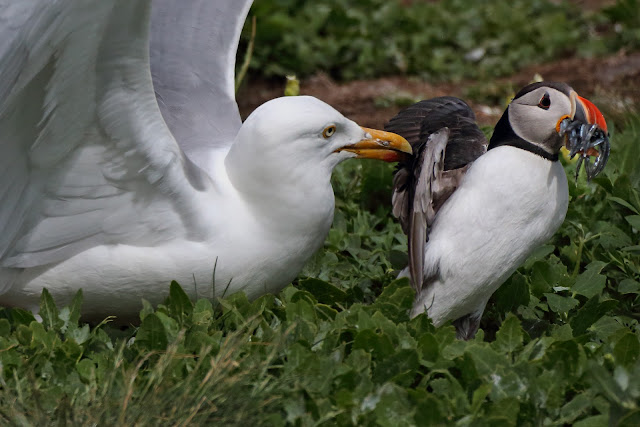 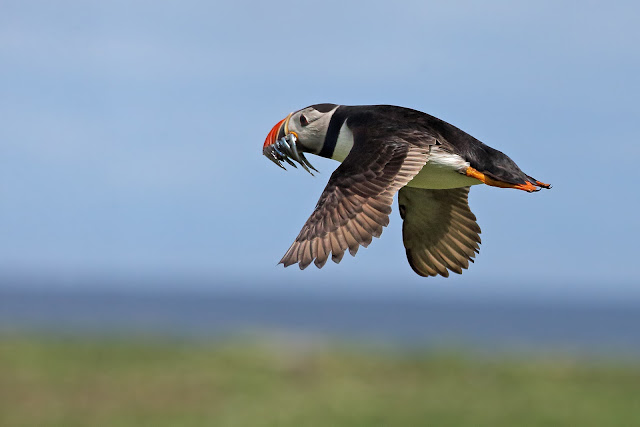 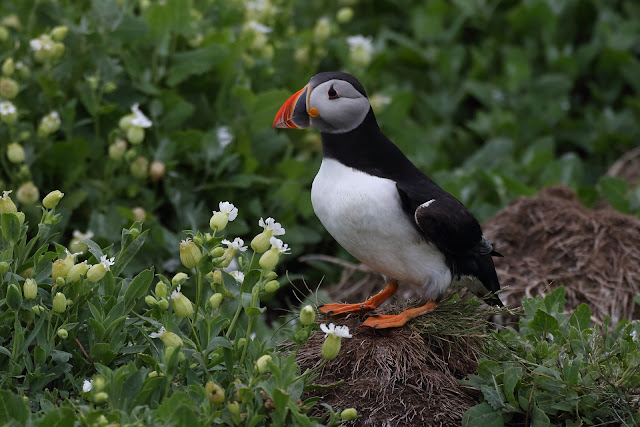 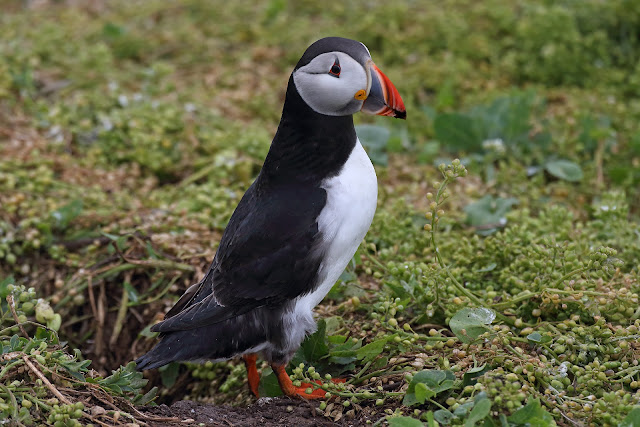 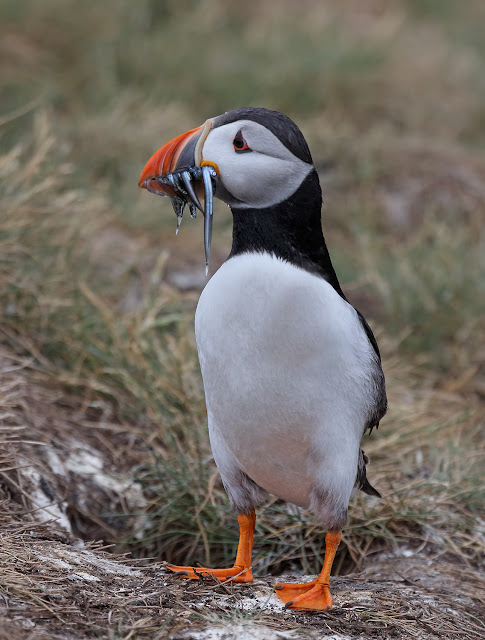 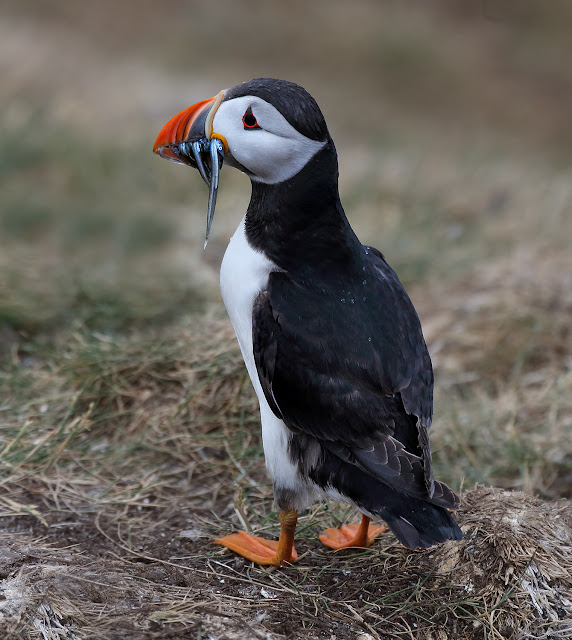 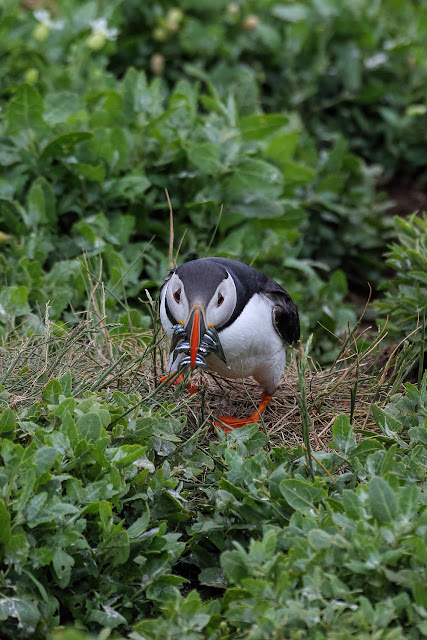 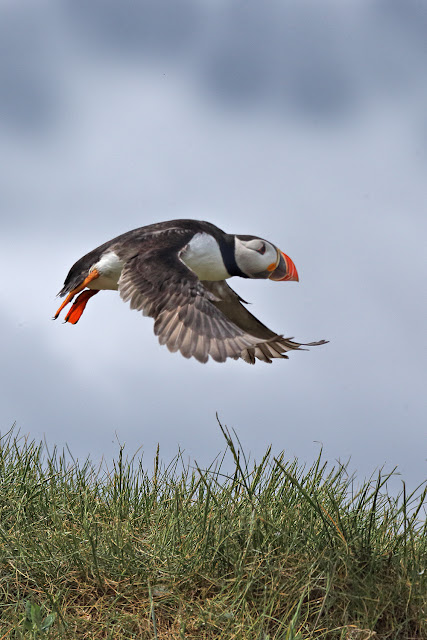 Species.
Below is a list of species and numbers that nest on the Islands. The pre-landing cruise goes close Grey Seal colonies and to the cliff-nesting species. The main species on Staple Island are Puffins, Guillemots and Razorbills. 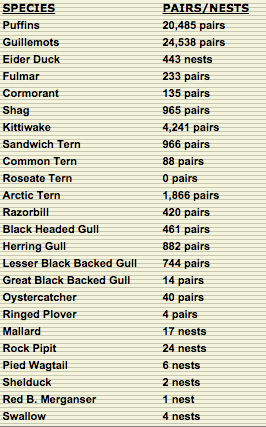 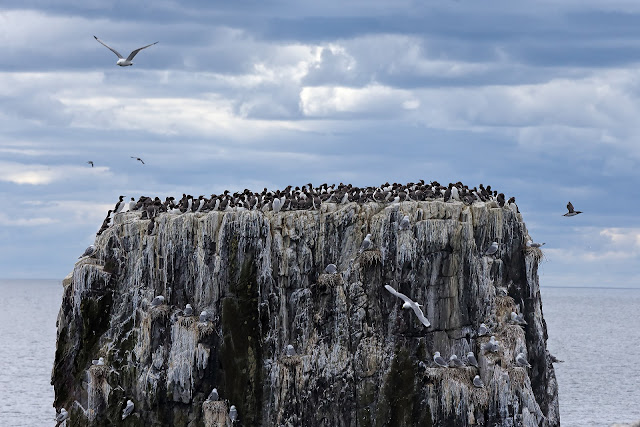 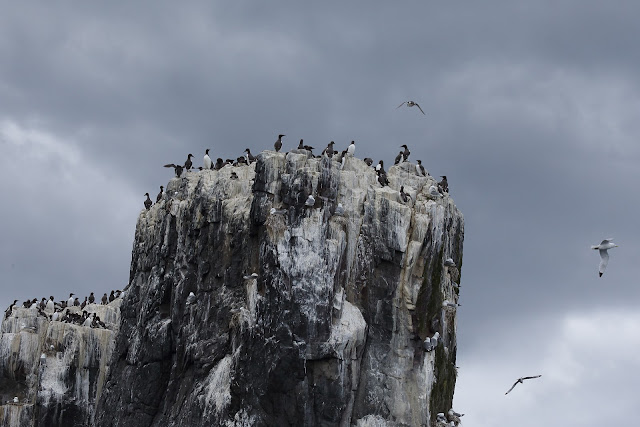 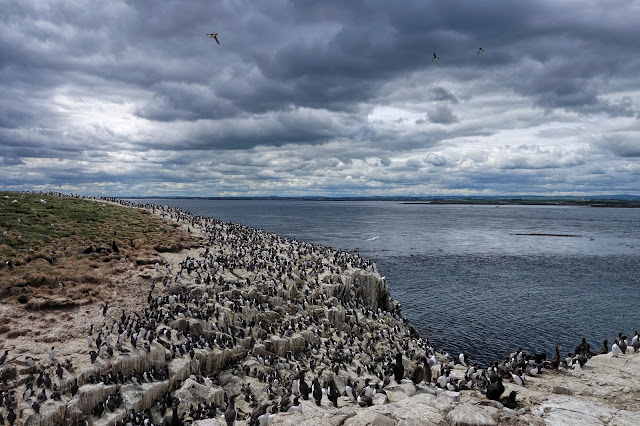