Some of the examples used in this article have not been shot in Malaysia. The object is to show that the dramatic rise in ISO values in recent years is the major contributory factor in the advance of nature photography.............. and is universal.

Most of us rejoiced when the first prosumer digital camera appeared on the market. There were a number of photographers who swore they would never abandon film but their ranks thinned markedly before 3 years elapsed. The instant gratification of viewing digital images and correcting errors during shooting sessions was indeed a major innovation. We did in fact go backwards for a while with some photographic parameters. Obtaining prints from even slightly cropped images from the early digital cameras was problematic especially since slide film could be scanned with very powerful digital scanners. There are three variables to consider when making exposures: aperture (f-stop), speed and media speed ISO value). The number of frames per second is also a consideration for action photography. The lens determines apertures so they have not changed. Let us compare the Canon D30 camera, released in 2000 with the Canon 1DX released in 2012. The D30 megapixel capture was 3.1 compared to 18.1 in the 1DX, roughly 6 times larger, The frames per second was 3 compared with 14, nearly 5 times faster but the maximum ISO capability was 1600 compared to a whopping 204,800 which equates to a 128 fold increase. Film ISO values ranged from 40-100 for most purposes but film could be pushed by one or two stops with altered processing or there was 400 ISO film available for the really adventurous. Quite a bit of visual acceptability was lost with the high ISO film. 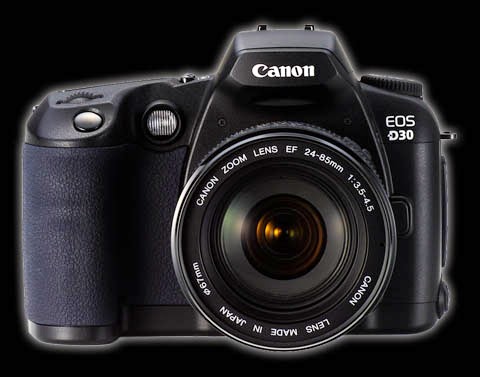 In my opinion the high ISO values claimed by Canon and Nikon are rather extravagant. These values will allow you to capture some sort of image in very adverse conditions but there will be a lot of noise apparent. However you look at it the increase in ISO values  has pushed the boundaries of wildlife photography and especially action photography. With each increase in camera speed it allows us to go into areas that we were denied several years back. Let us examine some of these areas: The following 3 images show two portraits that were obtainable with film and early digital compared with an action shot of a Kingfisher capturing a frog that requires an ISO value of at least 2000 even in excellent light. The latter shot wound simply be impossible with camera and image capture technology 10 or even 5 years ago.

I shoot manually all the time thus having full control over f stop, shutter speed and ISO values. I use spot metering often setting initially on a neutral grey zone near the area where the subject will be.....such as a perch (like the one shown in the image below). 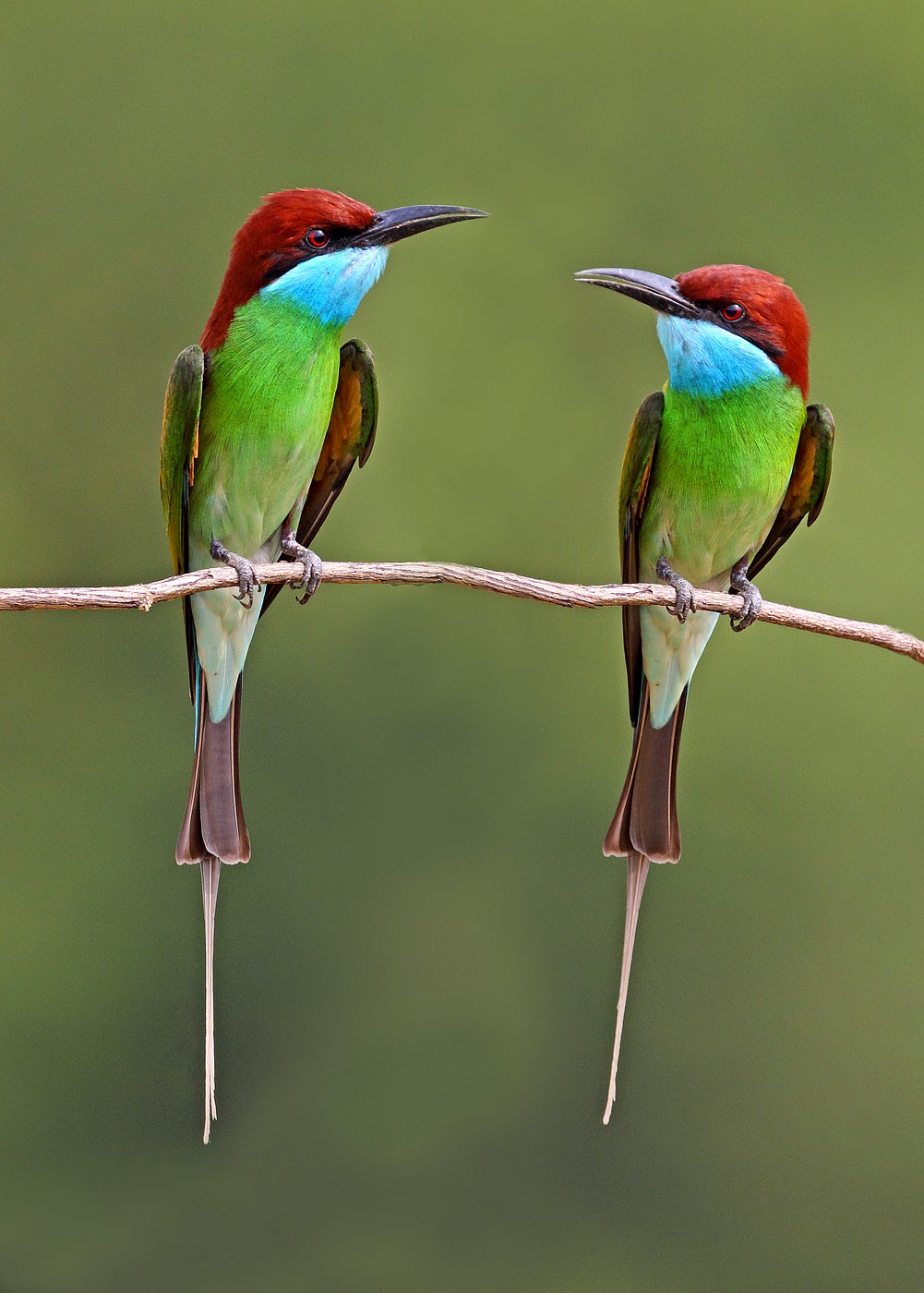 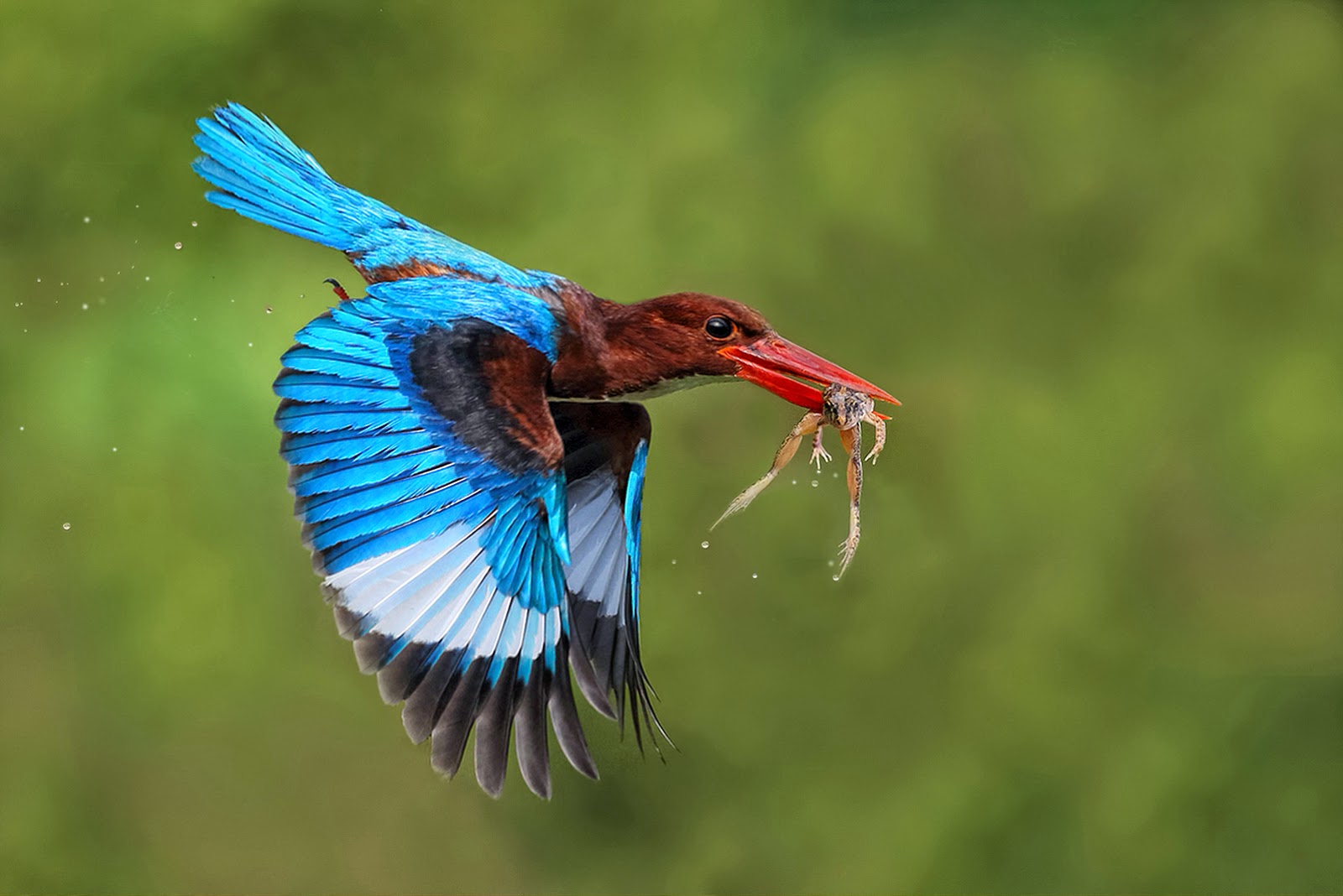 When photographing portraits I always bring the ISO value down, to say 400, but action can happen any time and you must be prepared to ramp up the ISO to that magical 2000. Bee-eater sex scenes are VERY actioned-packed. 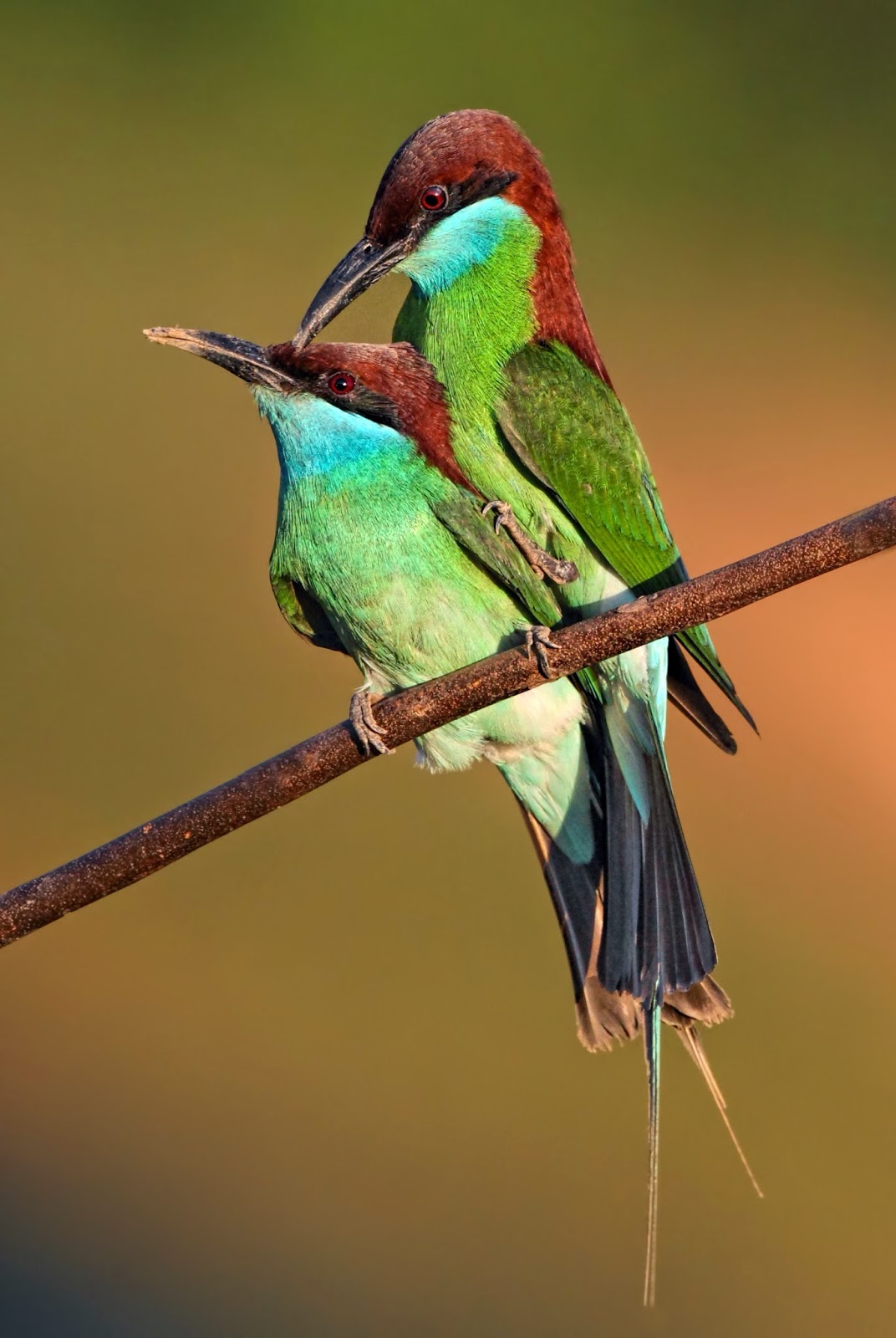 Photographers should ascertain the ISO value that suits their own requirements.

As mentioned above the manufacturers claims are rather inflated and you should experimentally determine what is the maximum ISO value that you can work comfortably with. I have found this value to be ISO 2000, hence the title of the article, going up to 3200 (and even 4000) in certain conditions. I need a certain quality in my images for image banks and for exhibition work. Even at these values I need to “de-noise” the background. For this I use Topaz deNoise as a Photoshop plug-in. Other de-noise products have been seen to be equally as good (Nik, Noise Ninja, Neat Image). 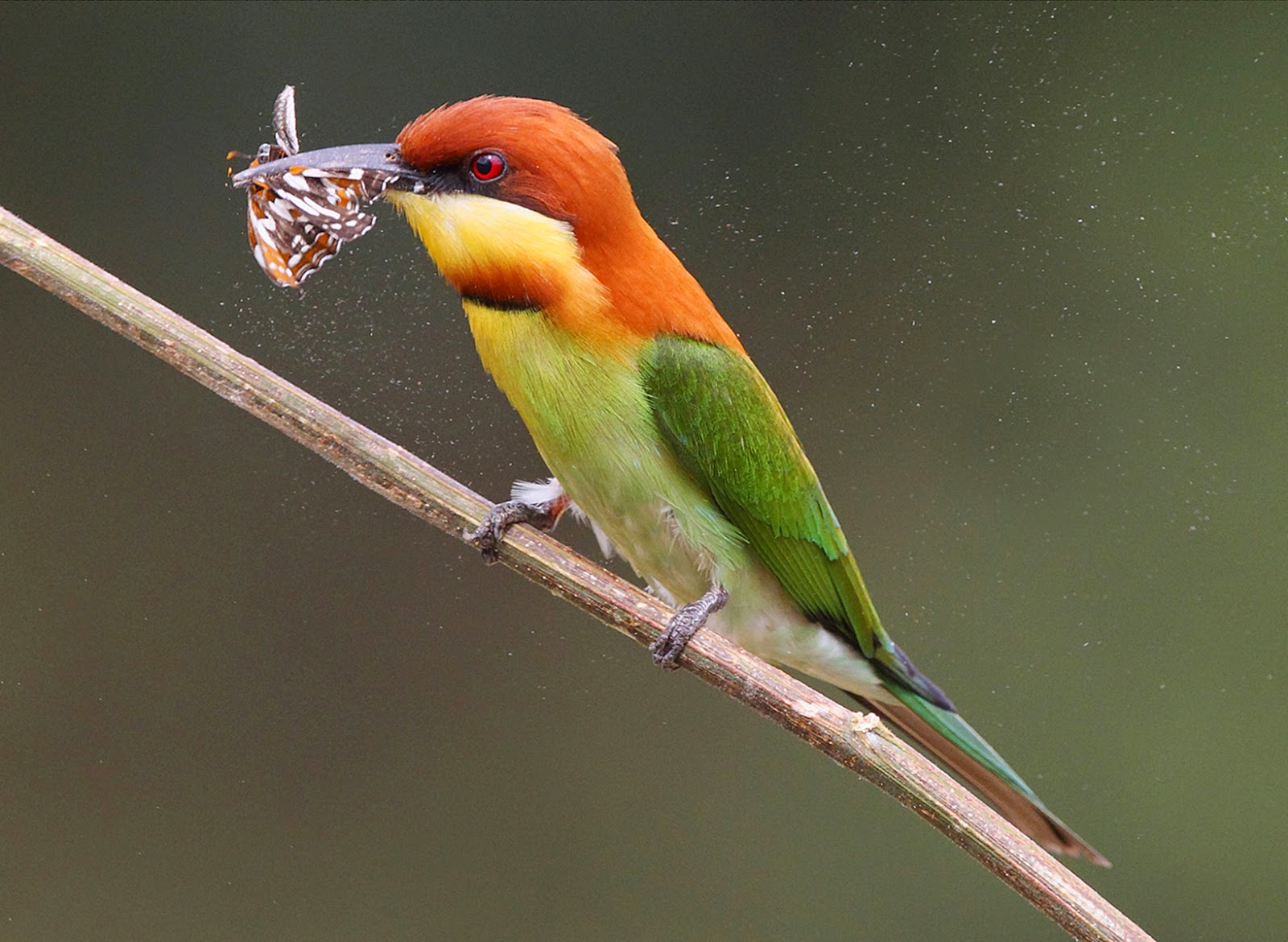 Birds on Sticks
The majority of nature photographers and especially bird photographers wish to record as many species as they encounter. Recording those subjects in open locations have been least affected by innovations in the last 1.5 decades however many species live in jungles or forests and generally in compromised light conditions. In the film days it was standard procedure to fit a flash, with or without an extender, on the camera before going ‘hunting’. Currently I hardly use my flash. To illustrate how values of 2000 plus allow images before not possible I will use a recent example where my intention was to write an article about Australian Bowerbirds. Three species were targeted on my recent trip to the Cairns Hinterland; the Great Bowerbird, the Golden Bowerbird and the vociferous Tooth-billed Bowerbird. Great Bowerbirds mostly build their bowers in relatively open positions but both of the other two species build their bowers in relatively dull rainforests.

As a preface when shooting birds I prefer to set an f-stop of f8-9 to accommodate the depth of the bird and with all living creatures you need speeds above 1/100th second to avoid the slightest motion blur…..although the faster the speed the better. However in nature photography as in life most things are a compromise.

The Tooth-billed Bowerbird builds a non-conventional bower on the floor of the forest. It clears a patch of ground and then decorates it with selective leaves arranged bottom-side up. The male then sings above the ‘bower’ to bring in receptive females. To record him singing in dark forest recesses I typically had to resort to ISO levels of 4000 with speeds as low as 1/50 and f values around 6.3….both below my preferred values. The background had maximum noise reduction applied. 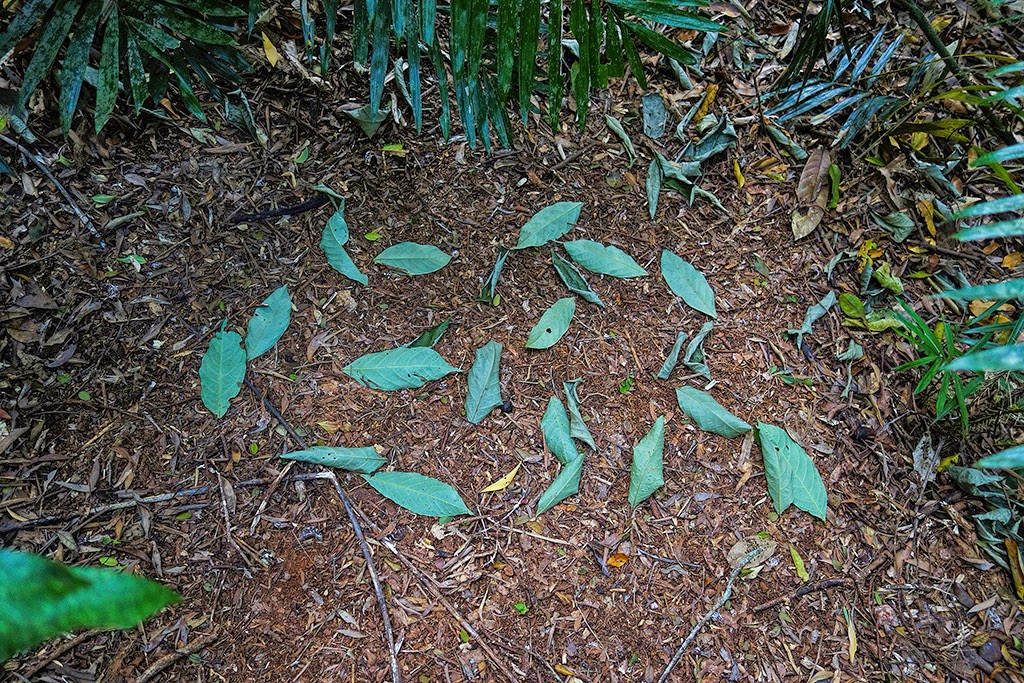 Golden Bowerbirds are more reclusive than most others in the Bowerbird species list and they are forest dwelling. I recorded the male Golden Bowerbird primping his bower, going about his daily life and bringing flowers to attract his lady. ISO values were set at ISO 3200 with f stops around 7.1 and speeds of 1/80 second….again lower than I would have preferred. I could have set higher ISO values but I wanted to avoid any noise on the main subject.
NB You cannot use anti-noise software on a detailed main subject unless your desired outcome is something that looks plastic. 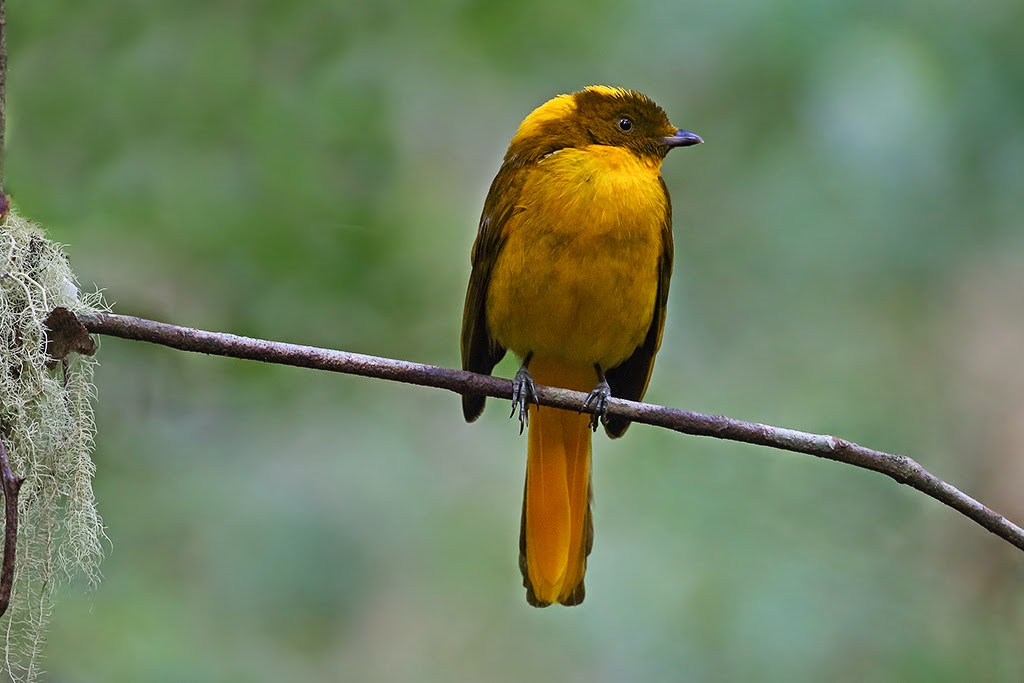 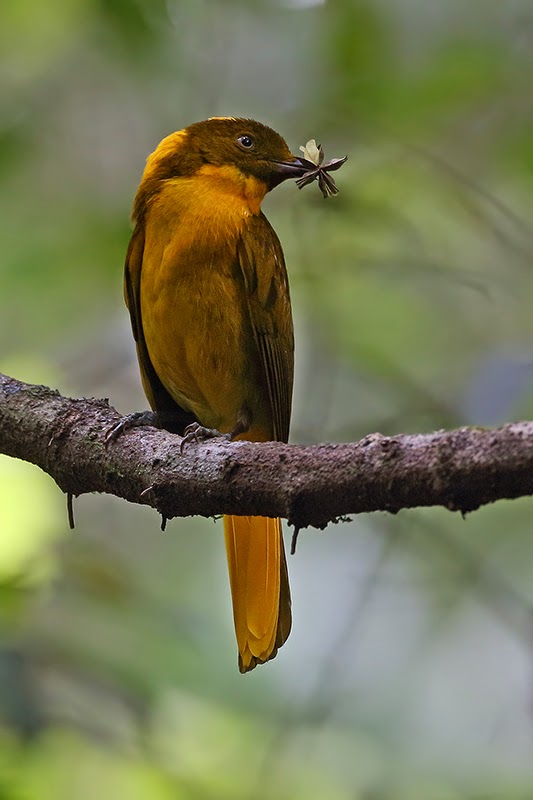 The Spotted catbird is a Bowerbird without a bower and is often foraging for food around sunrise. They have preferred feeding stations and these can be staked out to get good portraits. The light is not optimum at this time and ISO values at 1250-2000 had to be set to capture the birds at f8 and 1/125. 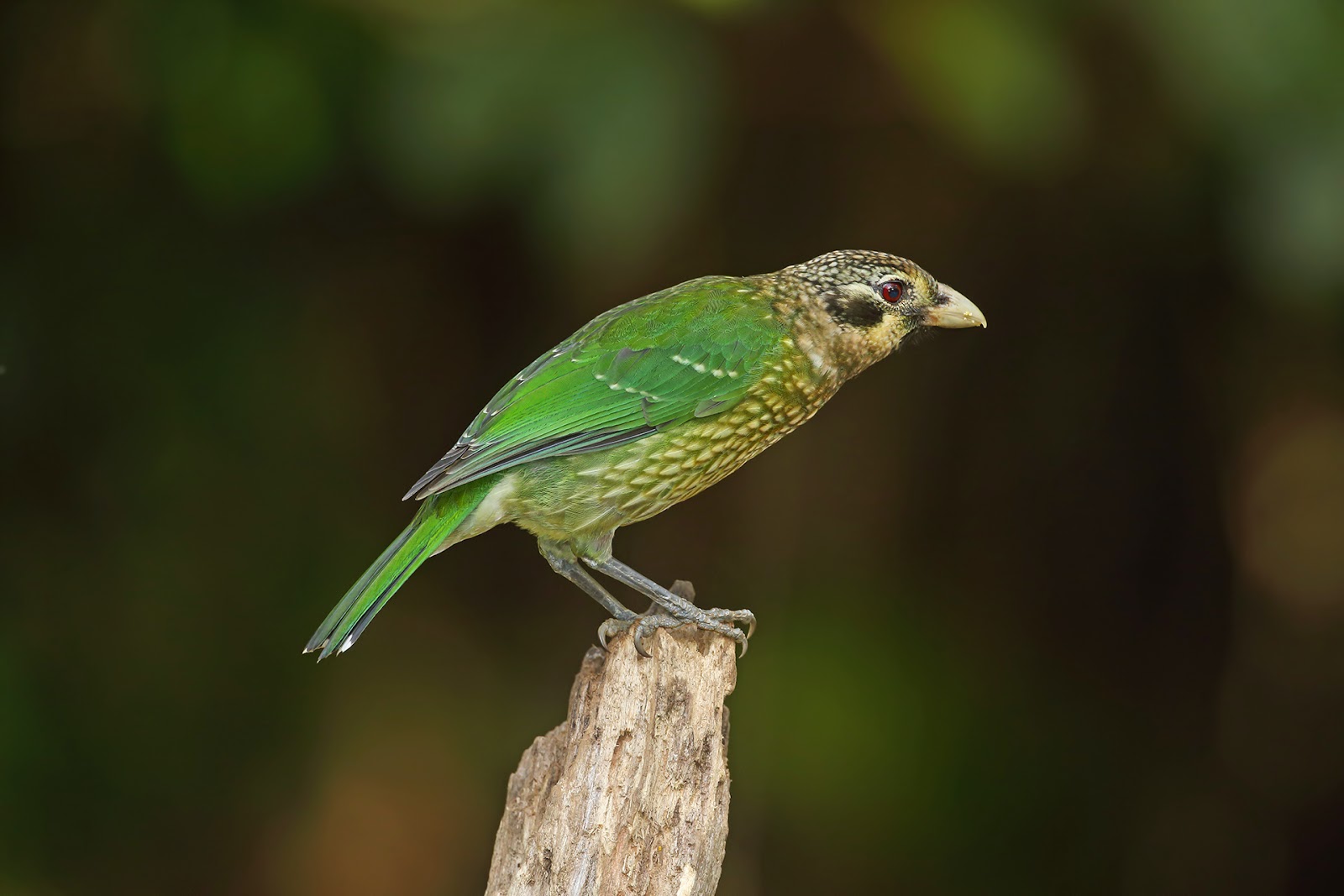 Nearby in a forest by a stream a number of little birds chased insects, captured small fish or had a nice cool swim. The Black-faced Monarch was captured at ISO 2000, f5.6 and 1/80th second while the Azure Kingfisher exposure parameters were ISO 2000, f7.1, and 1/60 second….both not quite at optimal settings.

Similar conditions were experienced in the local context while photographing a Common Flameback Woodpecker pair nesting. The nest-hole was in shade in broken forest and required a typical exposure combination of ISO 2000, f8 and 1/200 second. 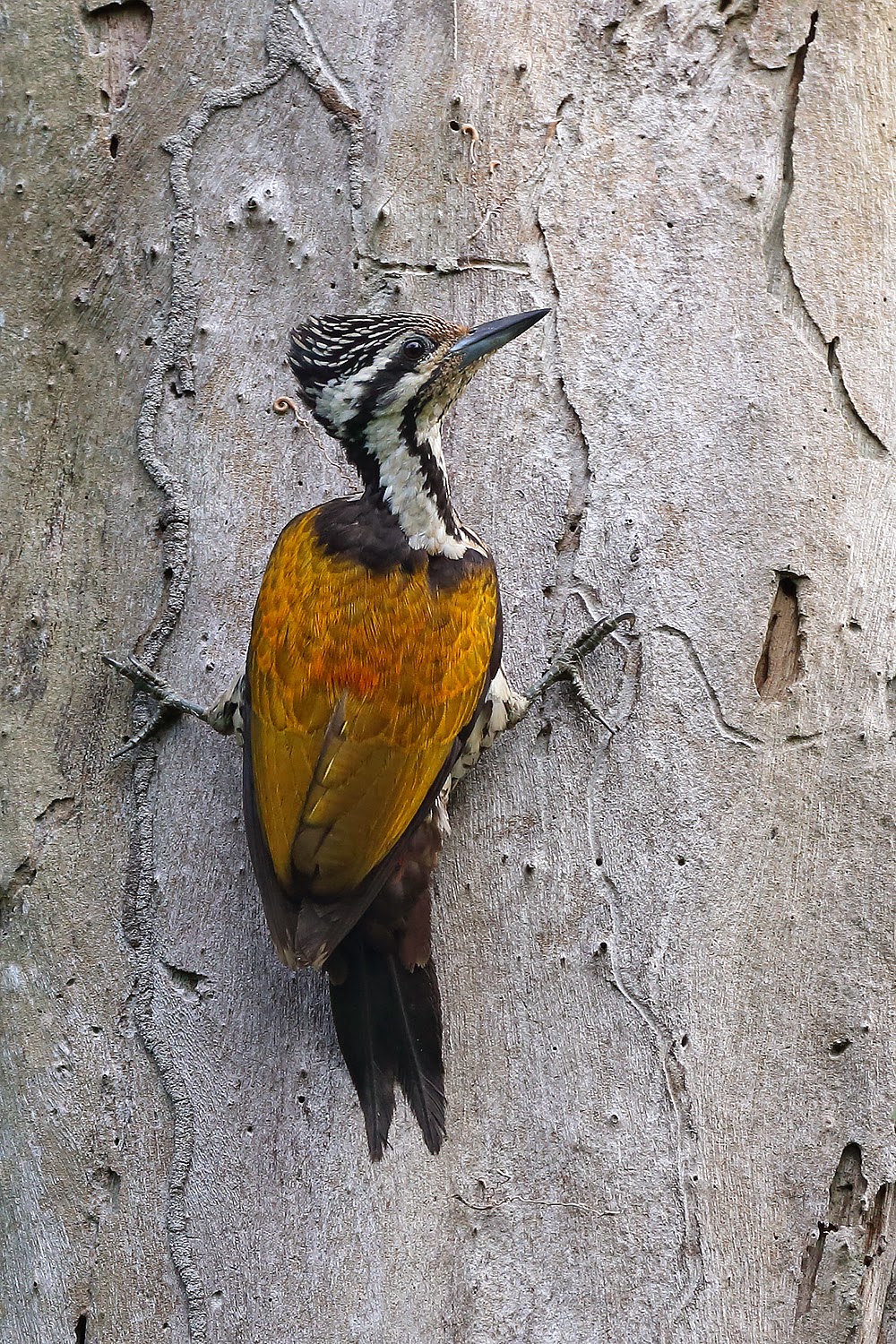 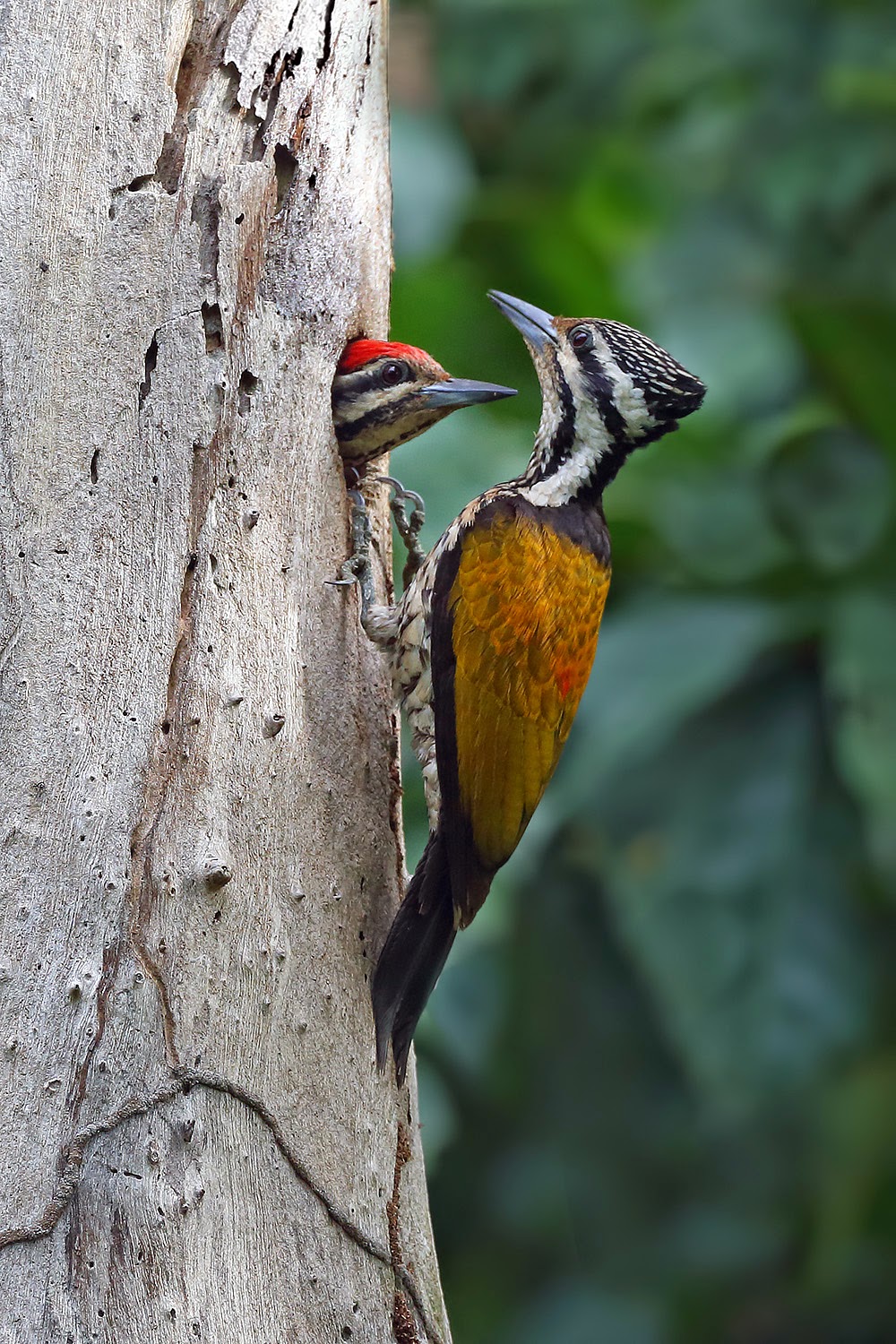 Landscapes
Even landscape shots of forests and stream needs a relatively high ISO Value in compromised light before the sun fully rises. A landscape image of Mossman Gorge, Northern Queensland was captured at ISO 2000, f9, and 1/125 second. It is better to shoot forest scenes in early morning light because patchy sunlight in forest is difficult to expose for and makes a very patchy background 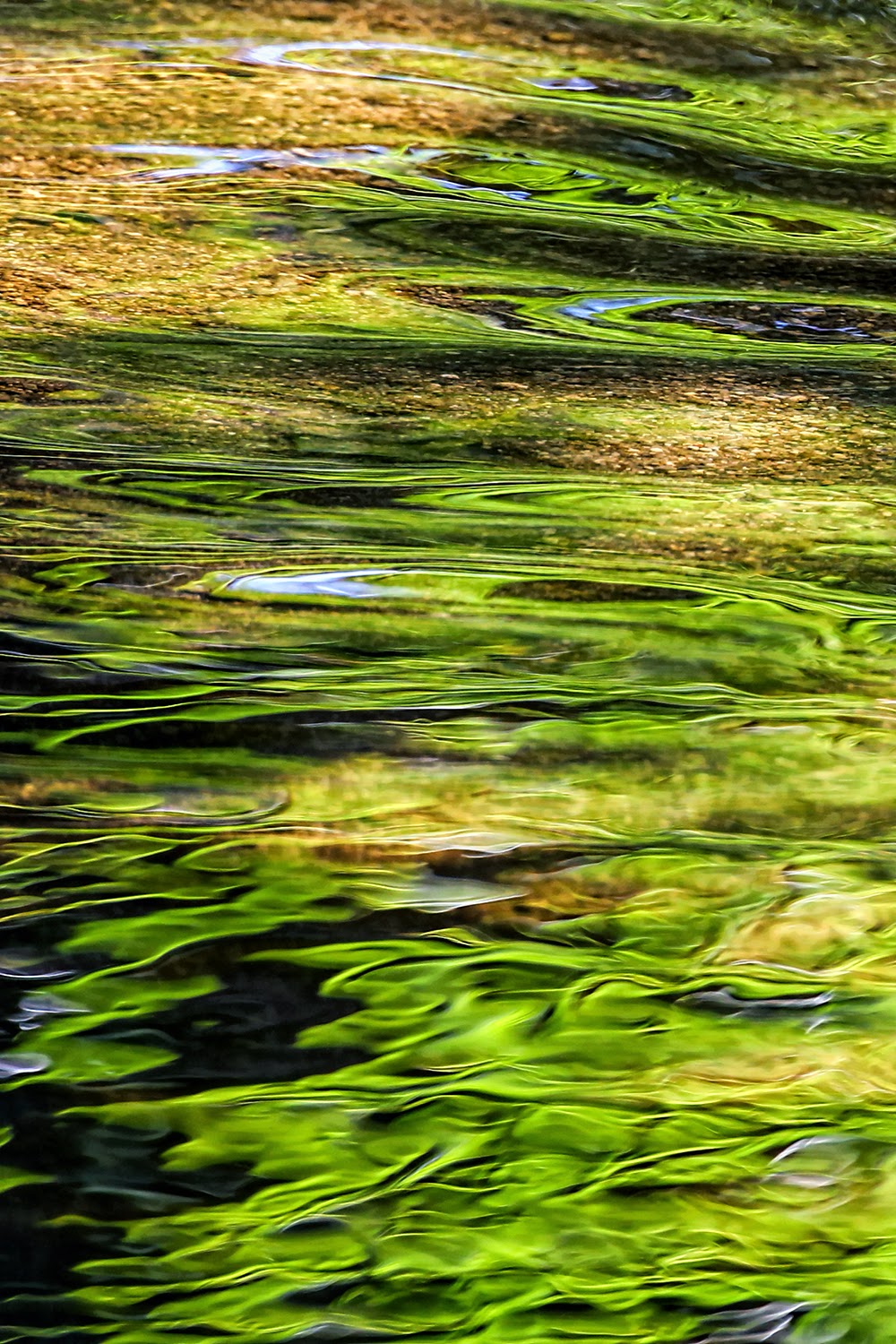 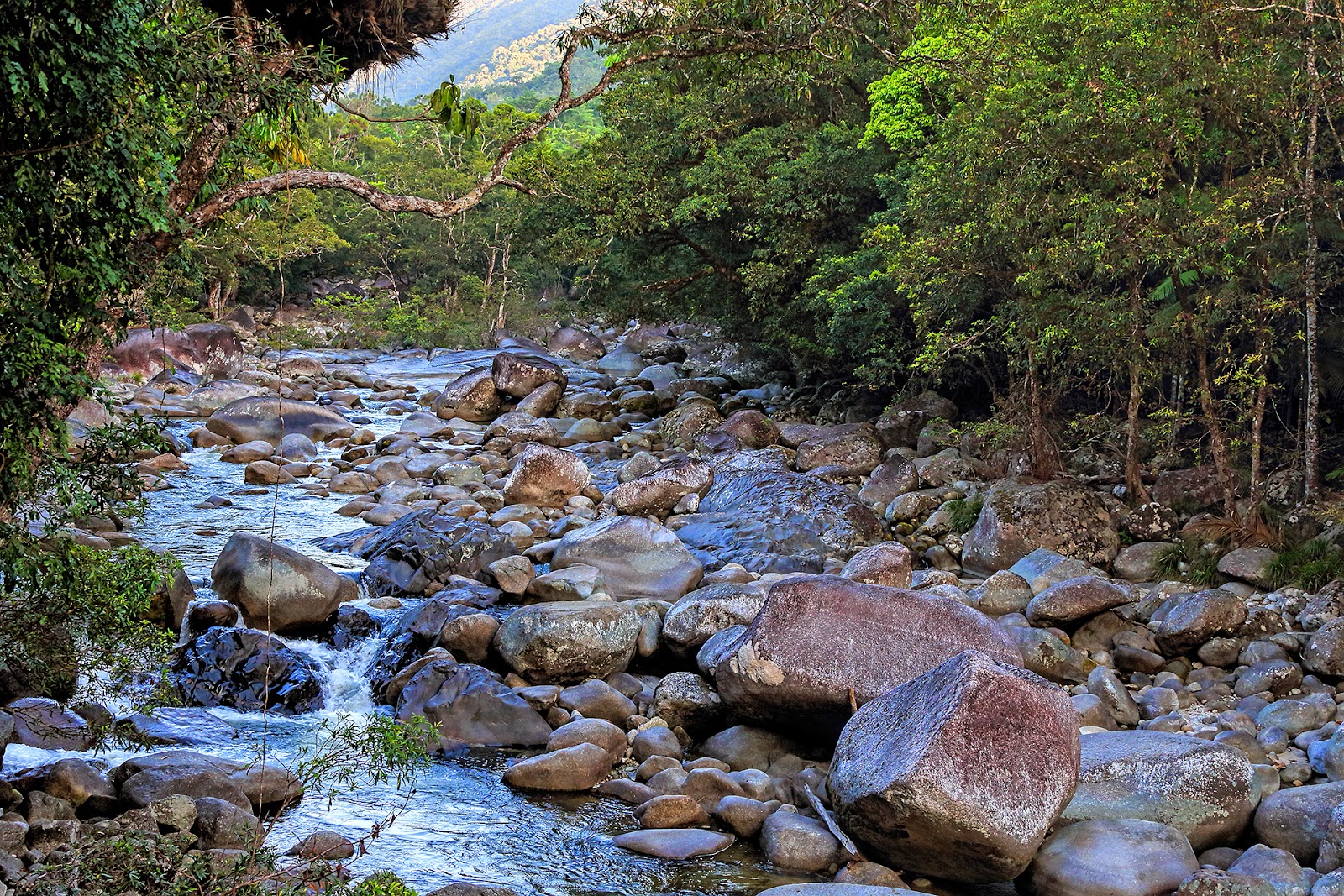 All of the above examples of images would have been nearly impossible to capture in the film days or the early digital era. Flash could have been used in some circumstances but some birds react adversely to flash and the resultant image is usually harsh.

Behaviour
Most behavioural shots incorporate some action so it is best to set an optimal ISO value to capture that key interaction. Although Great Bowerbird males construct their bowers in relatively open locations I often set an ISO value of 2000 in order to capture such behaviour. Three examples are shown of the Great Bowerbird rearranging some of his favourite attractant ‘toys’. A typical setting is ISO 2000, f8 and 1/320 second, which reflects a cloudy morning light but enough speed to freeze action. 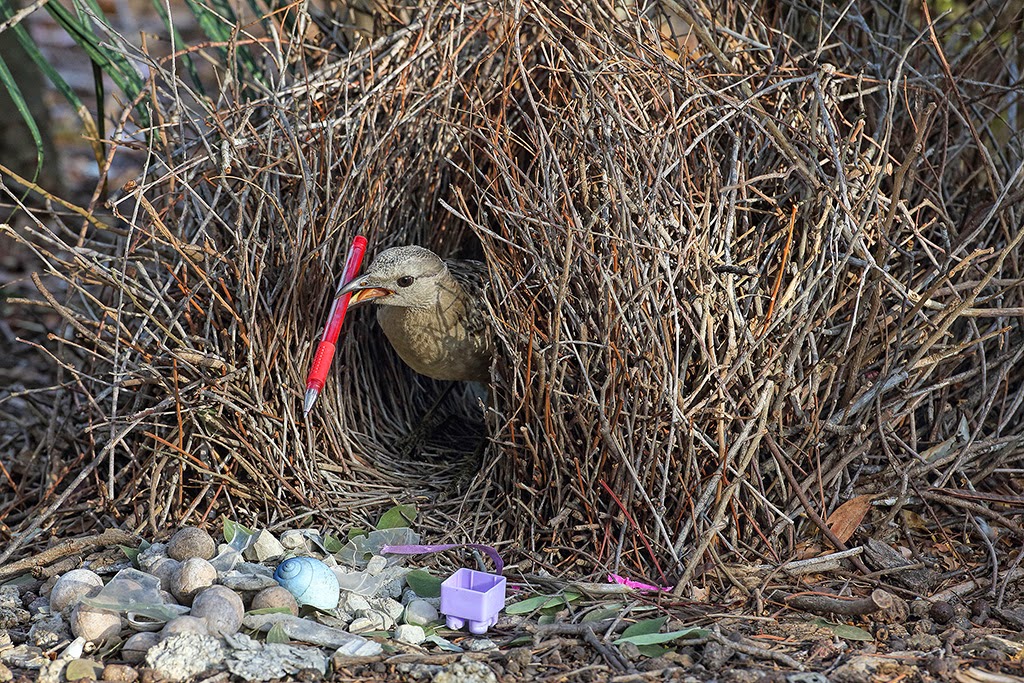 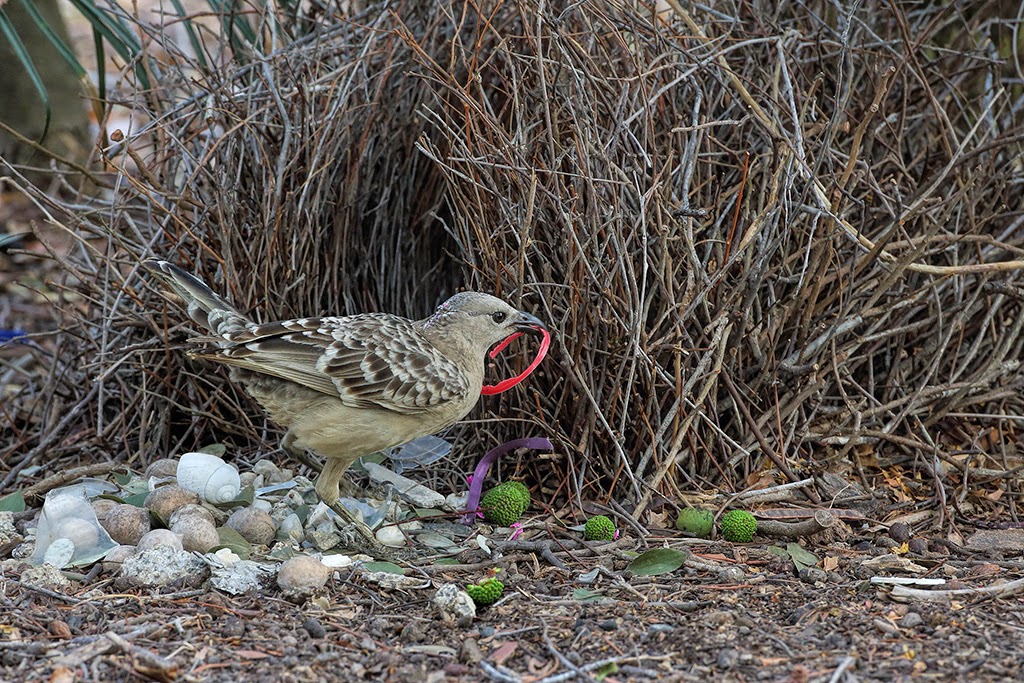 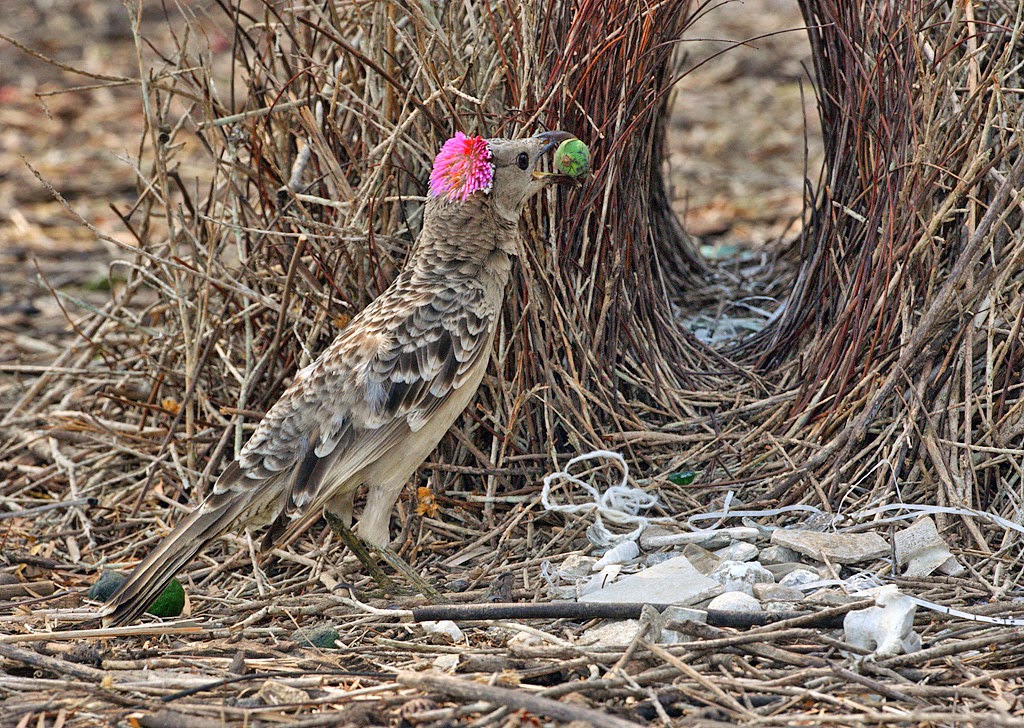 Another example of behaviour shot in less than ideal light was the display of the male Victoria’s Riflebird. Tree stumps, often within a forest setting, are used by the male to display to females. In this particular case a fern tree stump was in the clear at the edge of a carpark but a patch of forest obscured the morning sun so the main subject was in heavy shade. Value for these shots were ISO 1250-2000, f8 at 1/125. 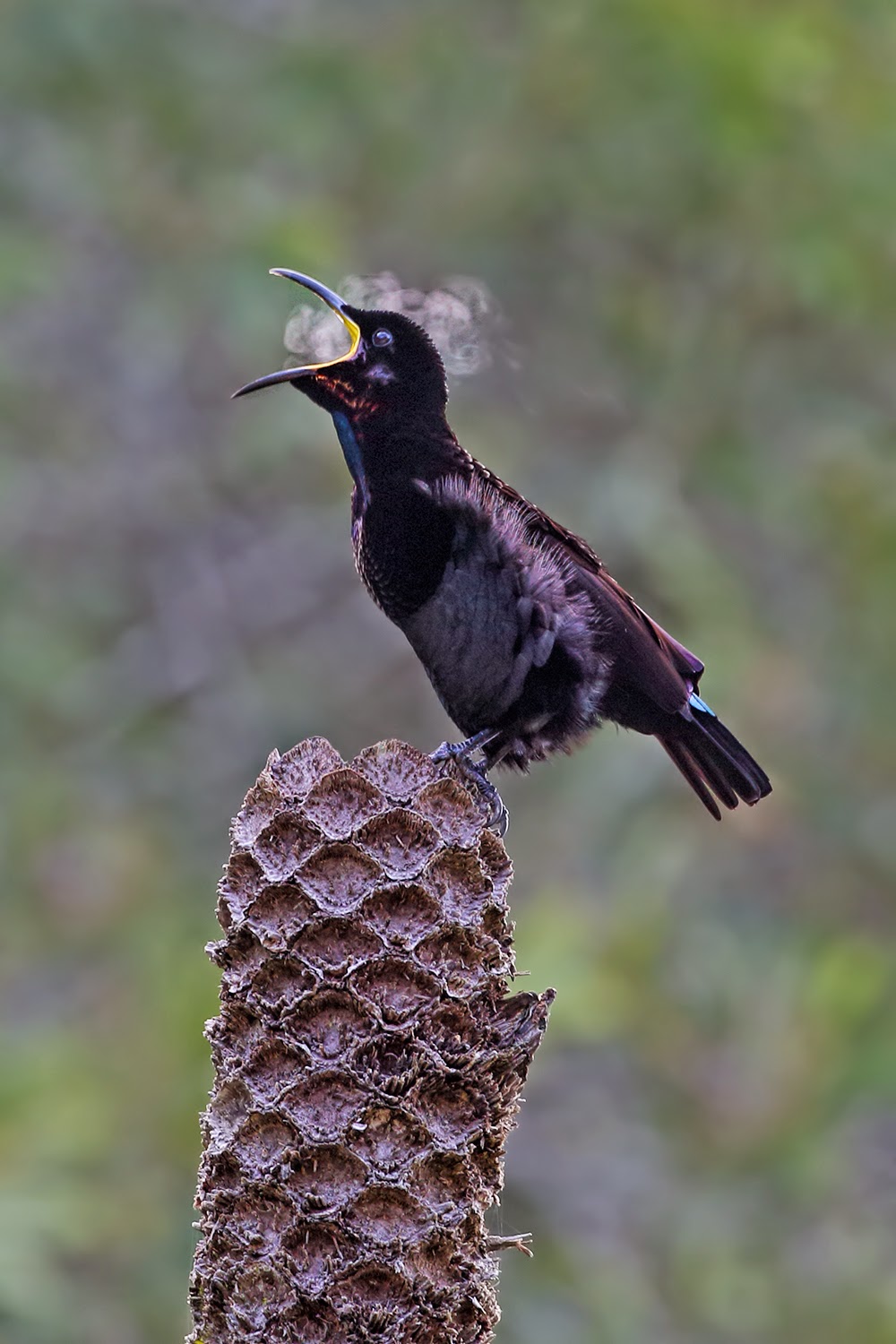 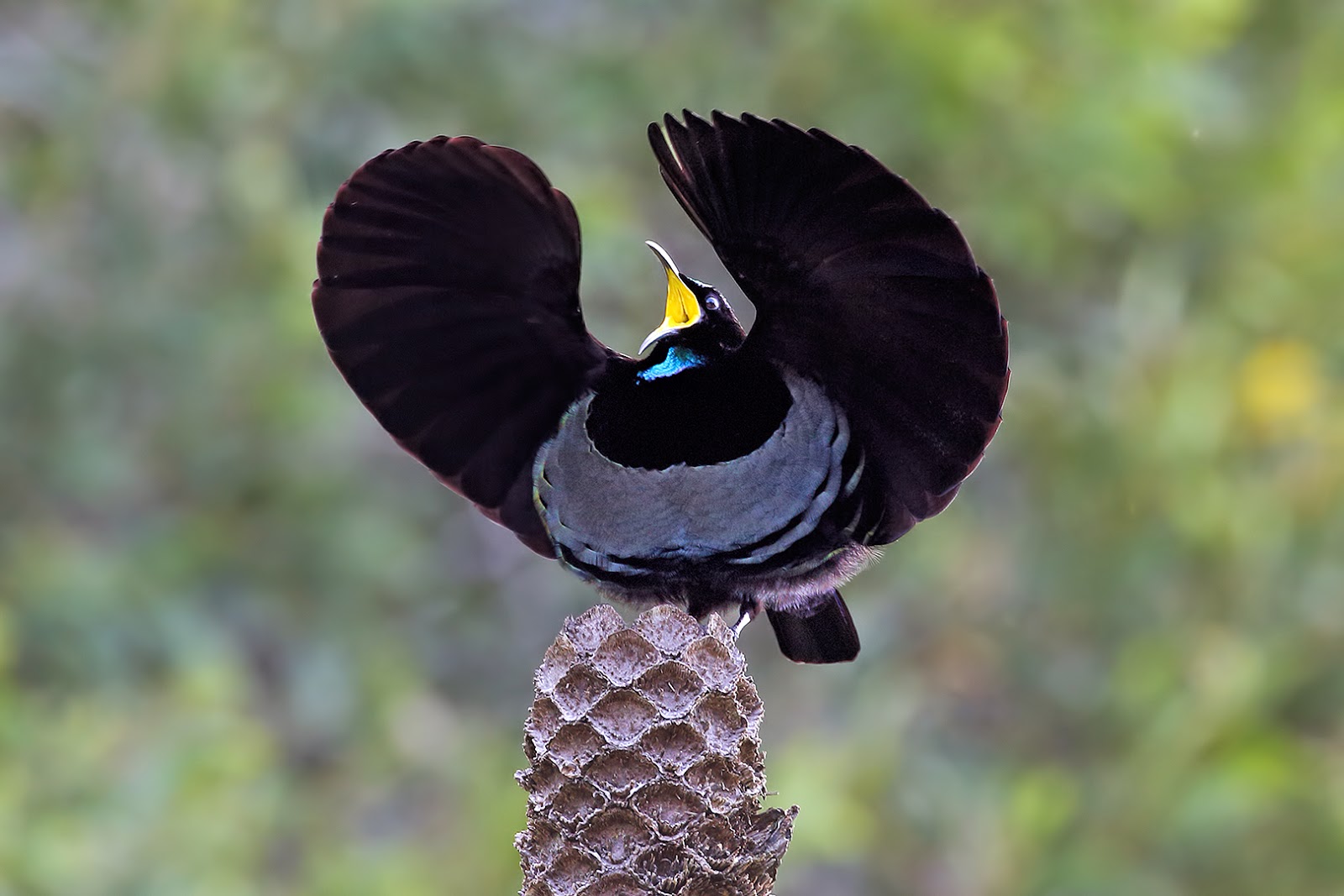 A further example of the value of 2000 ISO was when shooting a Blue-winged Kookaburra at a nest-hole in a tree. Because of surrounding trees part of the nest surroundings were in shade for most of the day. The shot I sought here was a feeding shot at the nest entrance as flight shots were precluded with the prevailing conditions. A combination of ISO 2000, f7.1 and speed of 1/1600 was chosen. The higher speed was selected to obtain wingspread landing or take-off shots as shown in the second image below. 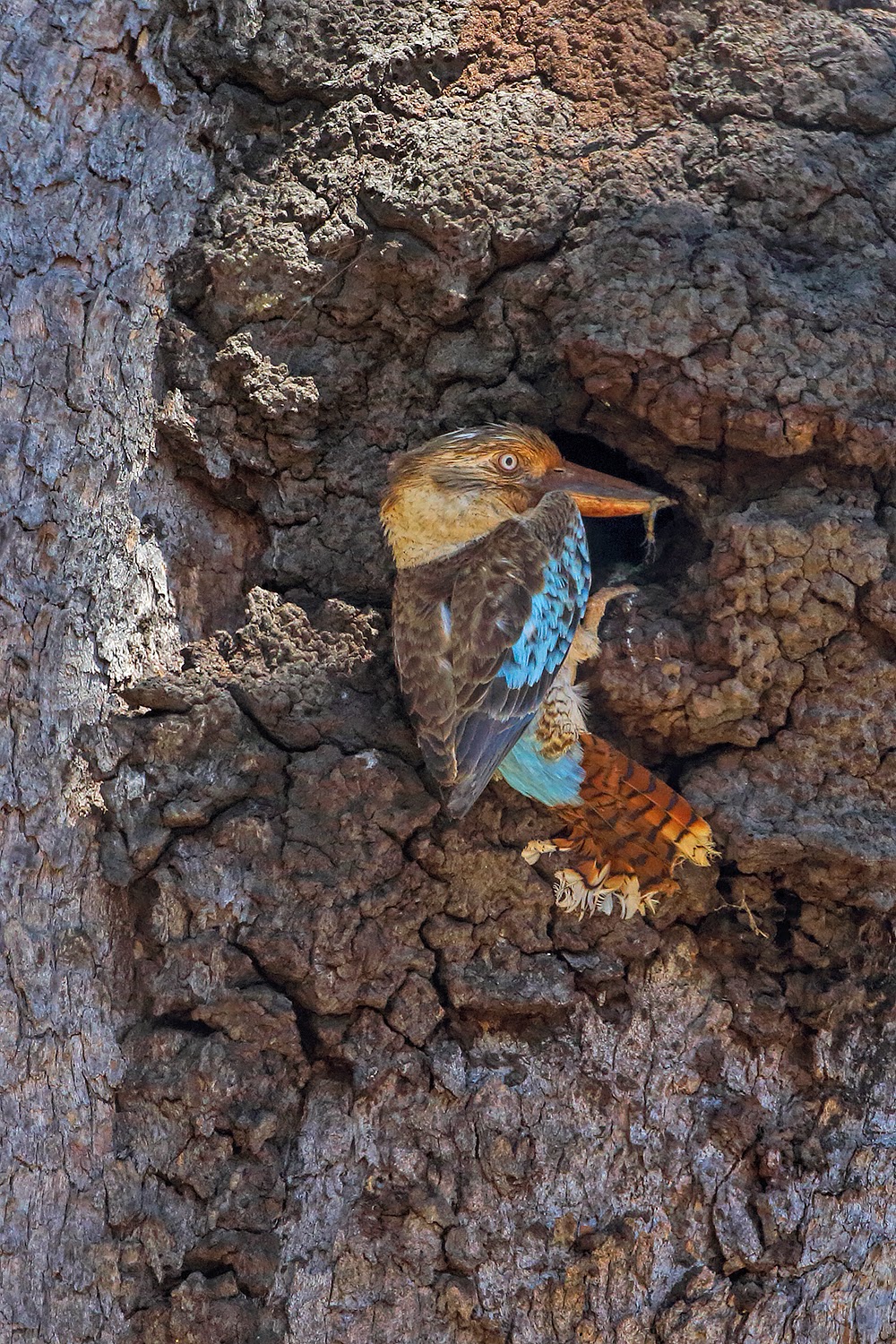 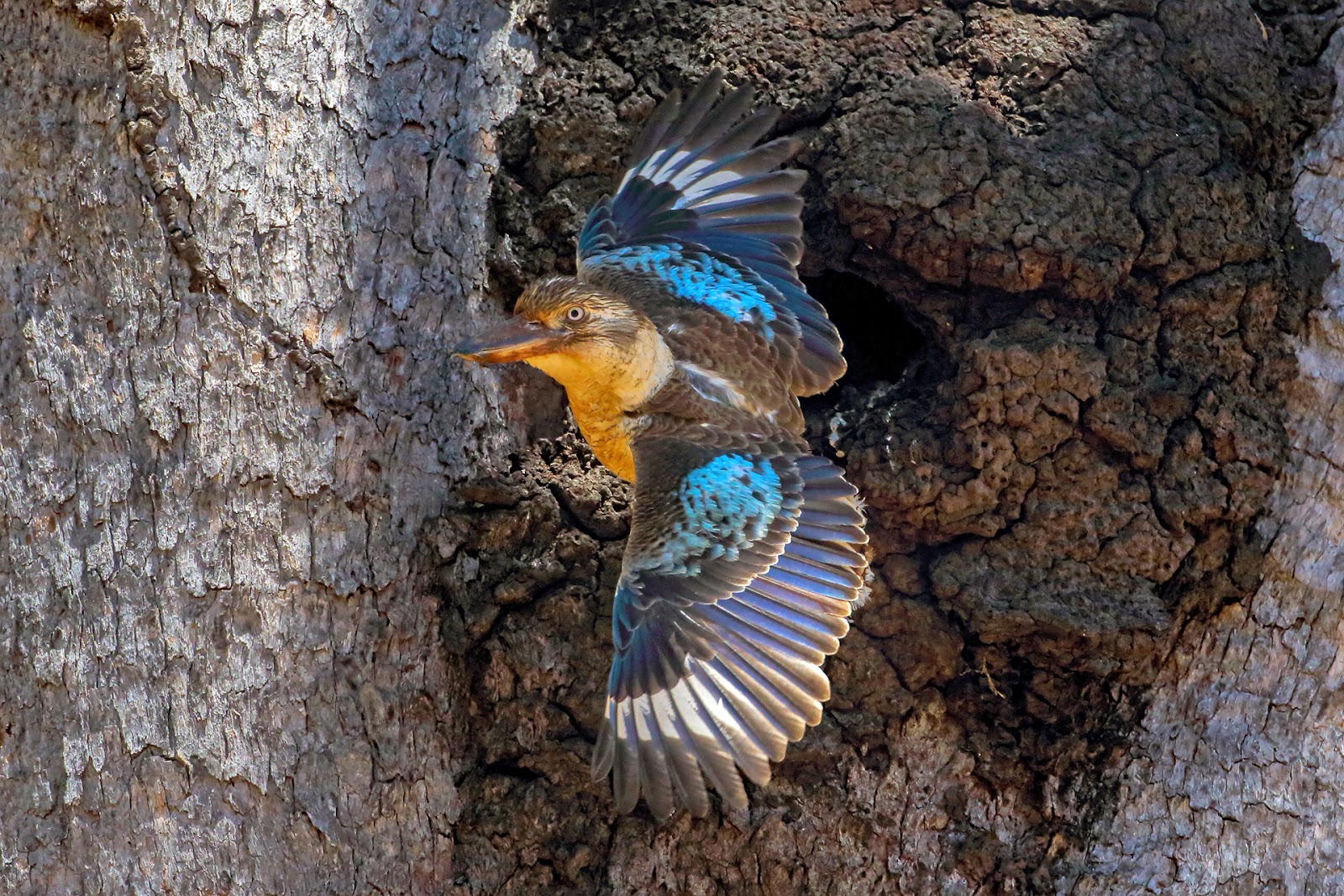 Action
The most impactful nature images are those showing action. These shots freeze action the human eye cannot visualize, which contributes to their impact. Experience with flight shots shows that you need speeds in excess of 1/2000 sec to freeze wing action. Even then you need the wings either fully up or fully down where they are at their slowest and present the thinnest in-focus zone.


I have spent some time shooting Bee-eaters in action and to achieve the best results you need:
(a) Full early morning sun
(b) ISO 2000
(c) f8
(d) Ideally 1/4000th second
(e) A pleasing smooth background ) I often use a 1.4x extender on my 500mm f4 lens to further blur the background

The following shots exemplify these parameters 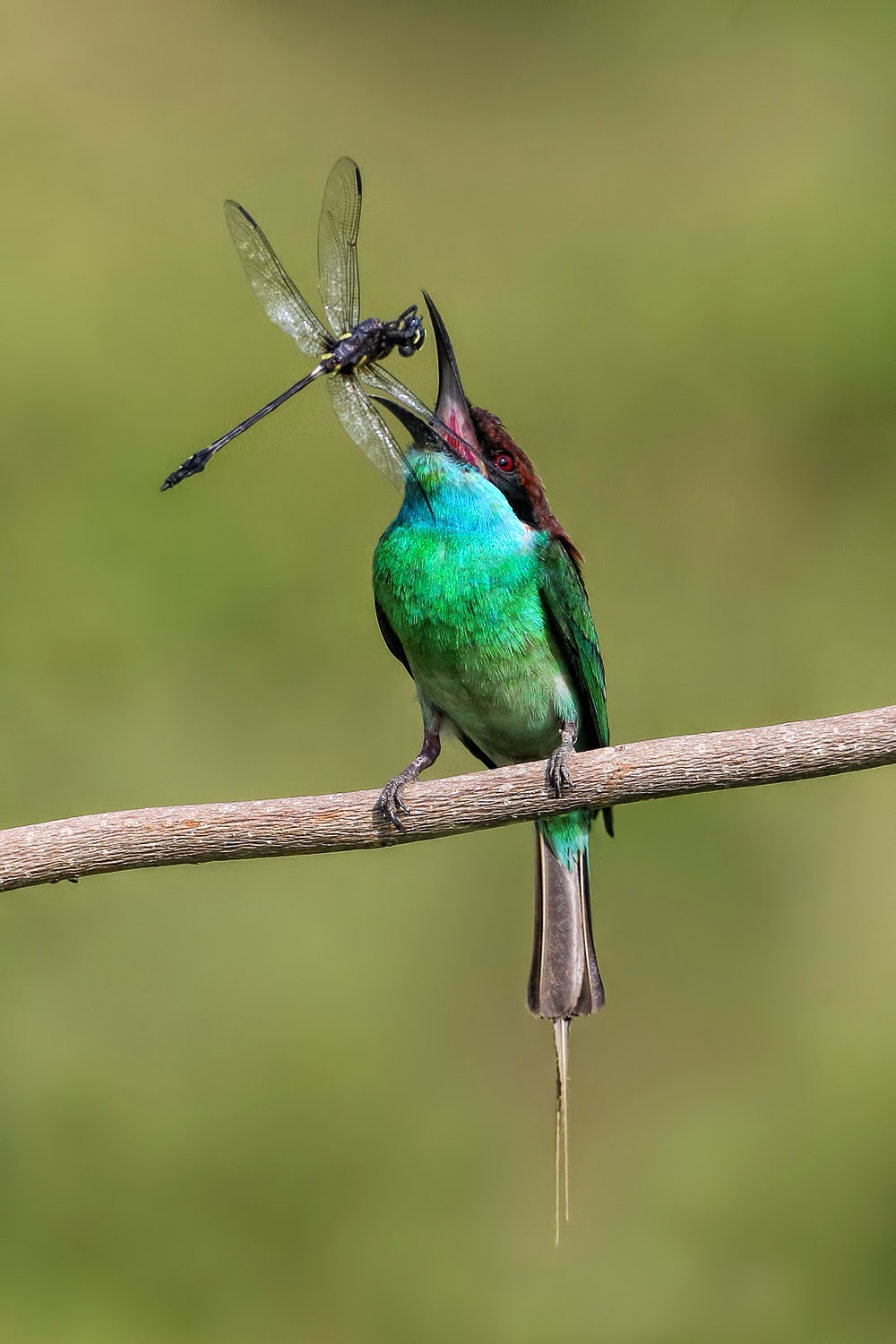 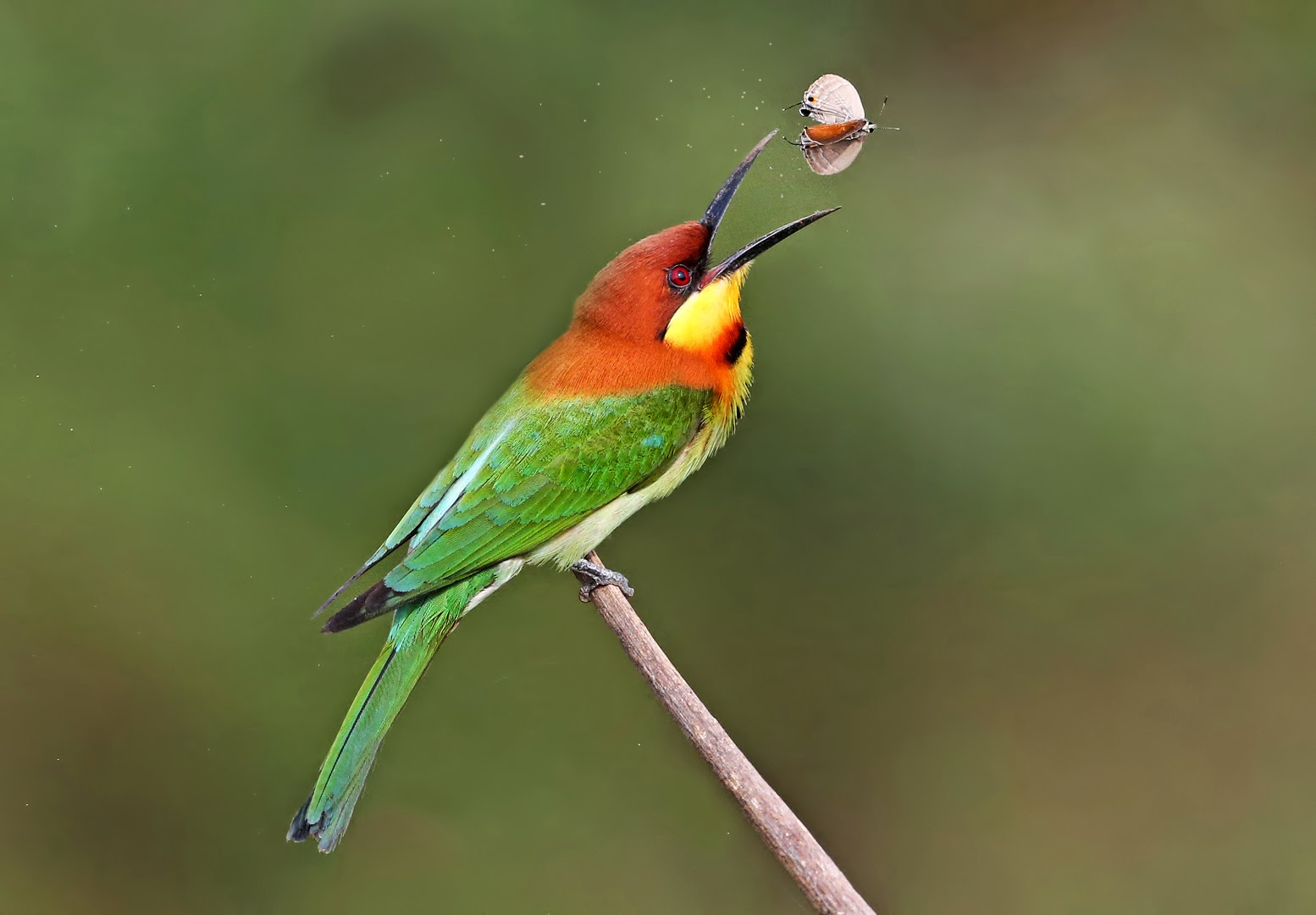 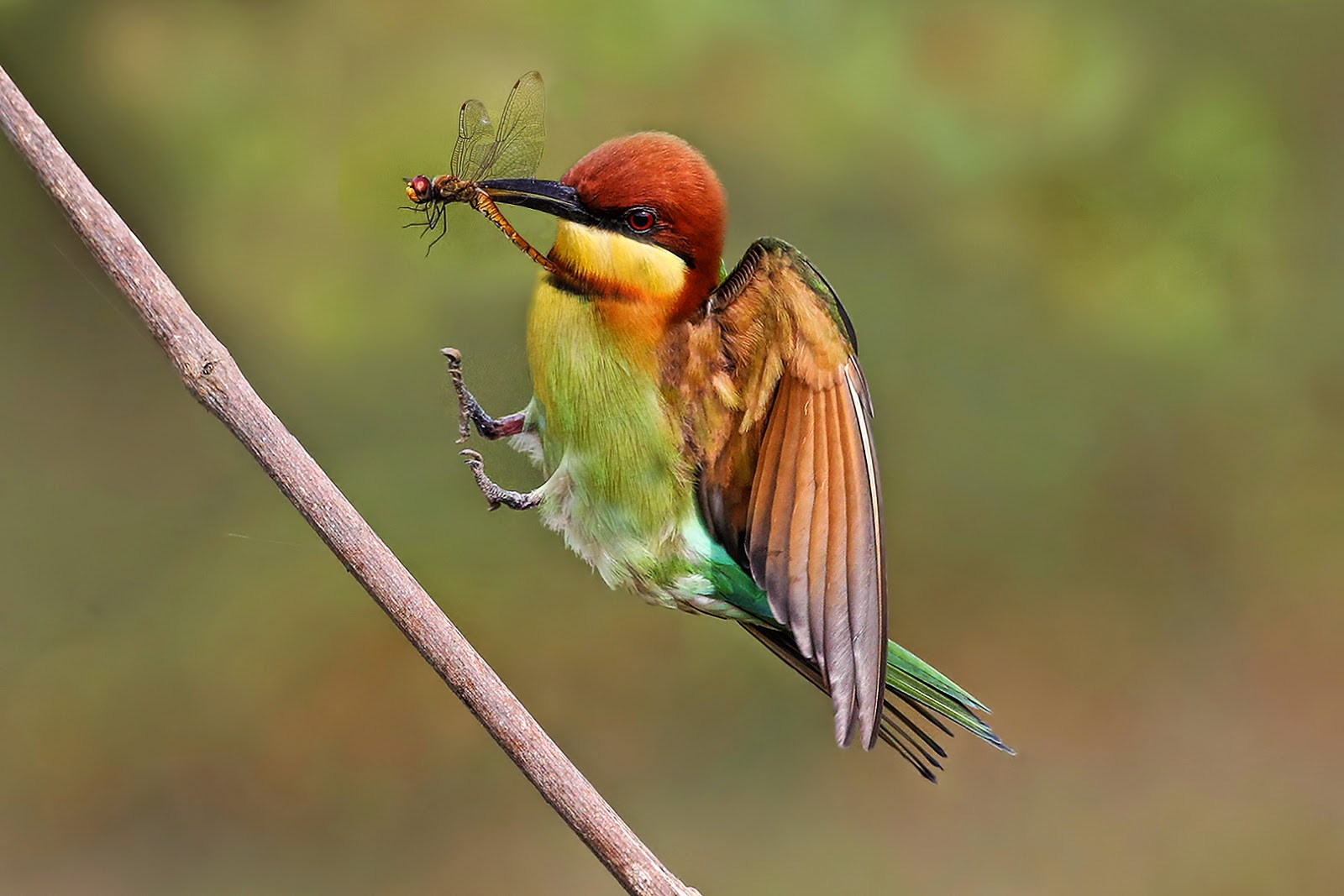 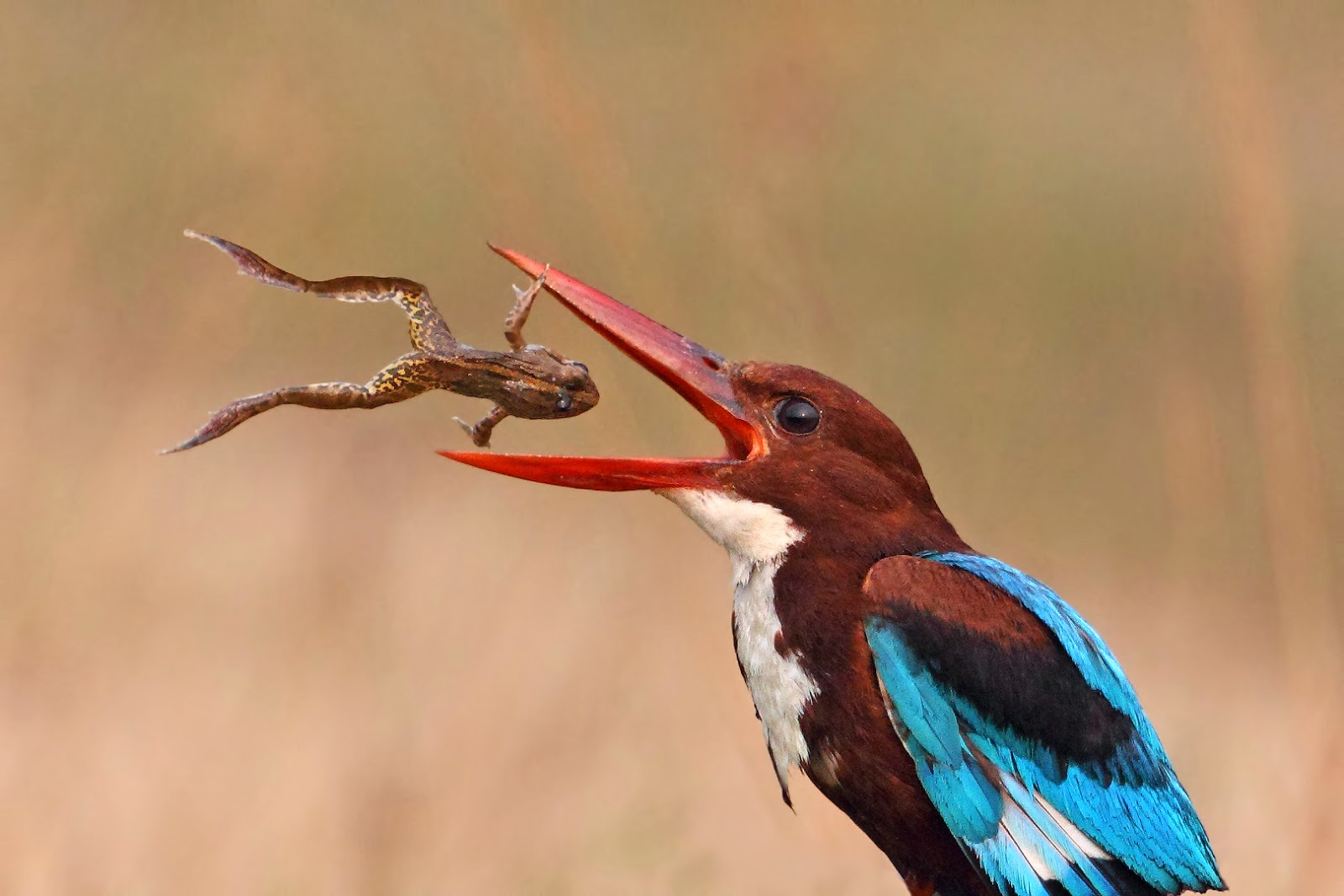 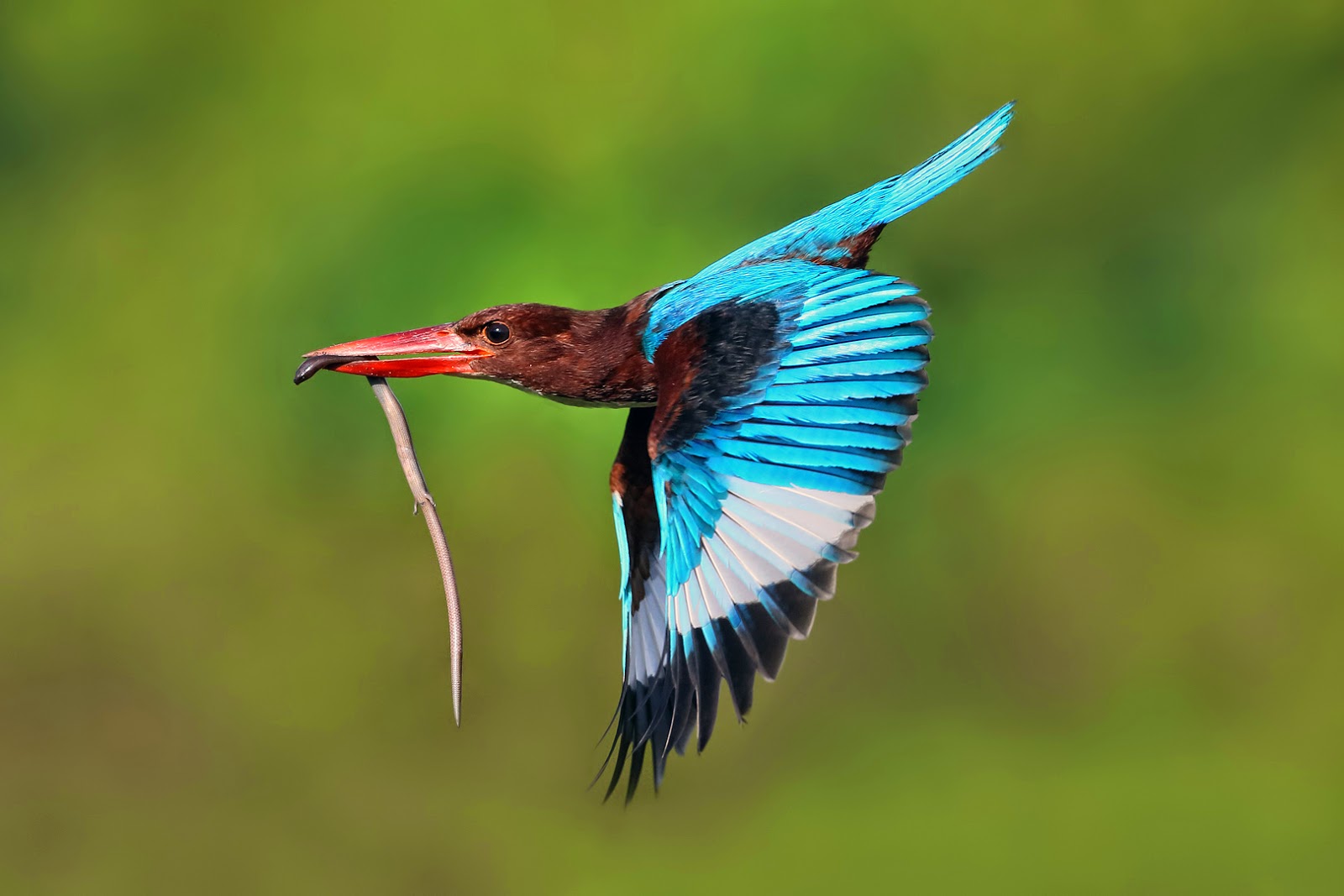 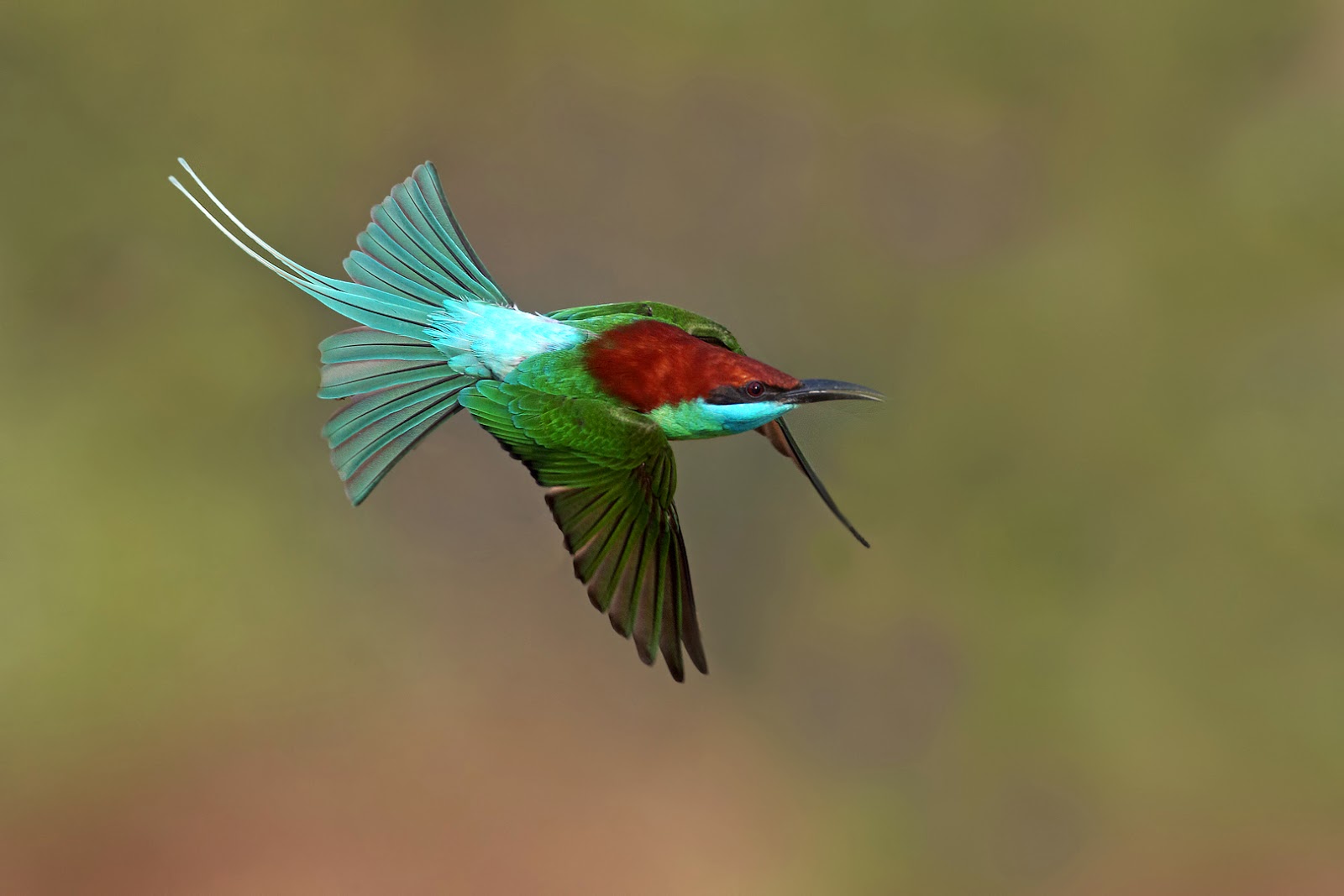 Although my selected value of ISO 2000 is somewhat short of the manufacturer's claim it is 20 times faster than film days and 5 times faster than the optimum ISO value of early versions of prosumer digital cameras. Such values produce quality images that can be used for a number of purposes, as illustrated above. Images from dull light conditions and especially action shots have become more possible. The increase in ISO speeds is the biggest advance in digital photography. In the future it will be interesting to see if this advance continues or innovations come from other areas, such as a reduction in size and weight of equipment.
Posted by Graeme Guy at 00:34