The Common Flameback or Common Goldenback (Dinopium Javanense) is a medium-sized, golden-backed woodpecker with long and solid black irregular lines on the head and neck. Both sexes have black eye-stripes joined to a black rear neck stripe. The male has a red crown and the female a black crown. Each sex has black-scaled underparts and a red rump with a black tail. The bill is smallish and the bird has only three toes. 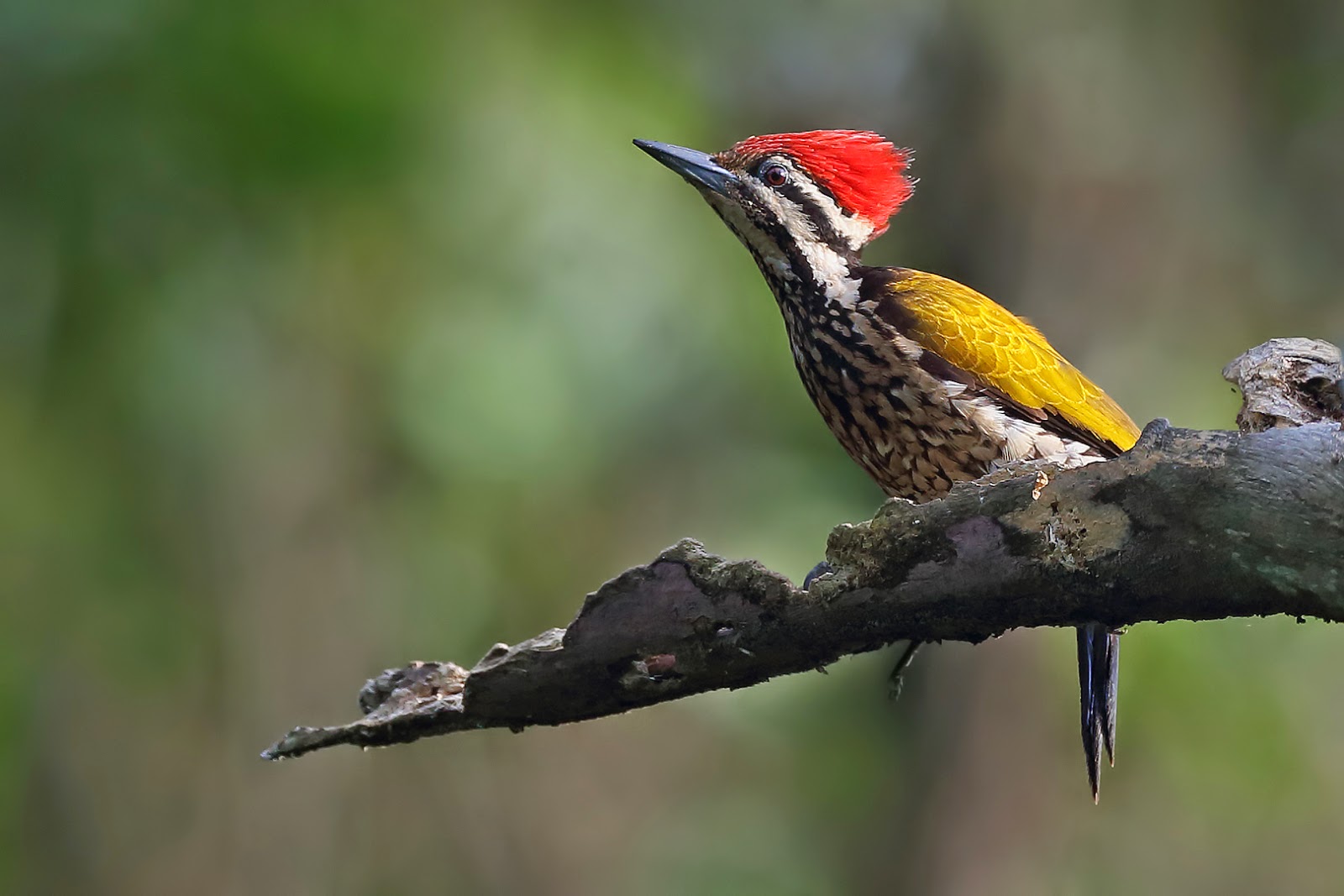 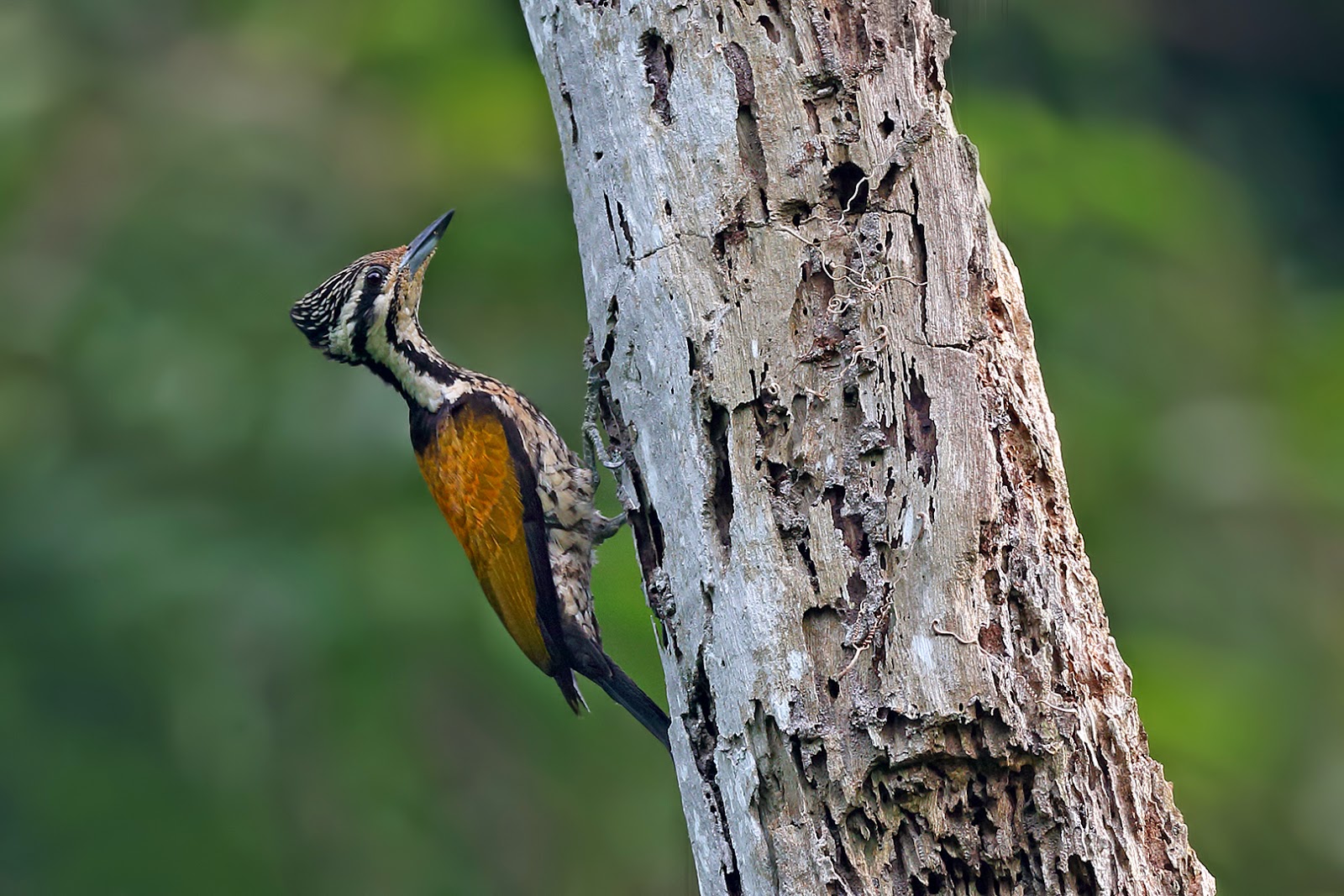 I first came across the species in Singapore and one male liked to look at himself in the mirror of our parked car. I photographed one nest in 2006 in broken forest territory near the Mandai Zoo. The woodpeckers were very shy and did not approach the nesting tree if any human was visible. I set the lens on a tripod and aimed it on the nest hole entrance and fired the shutter via a radio release. In my current location in Penang, Malaysia I have come across a small density of the species at Air Hitam Dalam and another mangrove area near Nibong Tebal. Recently a friendly bird photographer in the pointed out an active nest to me at Air Hitam Dalam. I decided to spend some time observing and photographing the nest to add to the knowledge base of the species.

The partly or fully dead tree where the nest cavity was located was not in the best location for photography. The entrance was oriented towards the early morning sun. Normally this would be ideal but there were a number of broad leaves from an adjacent tree in close proximity and these cast shadows in and around the hole. Bright overcast light was a more ideal light for photography. Initially I set up my camera at right angles to the entrance hole and as long as the sun did not shine brightly my background and surroundings were acceptable. 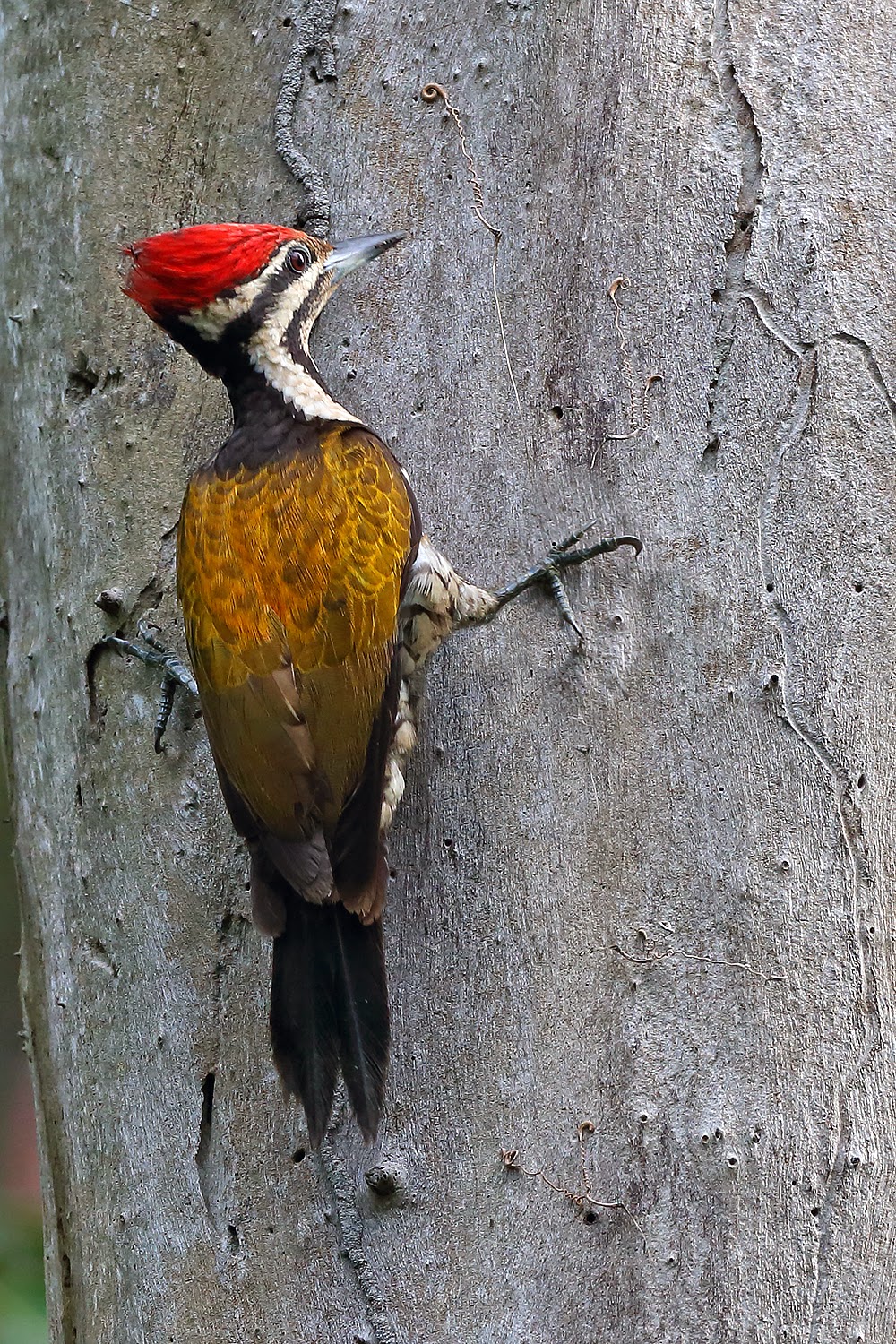 I have photographed other local bird species supplying nests and the best action shots occur when adult fly towards the nest with prey in their bill. An example of this is the White-throated Kingfisher flying towards the nest with a small-legged skink in its bill. The Blue-throated Bee-eater likewise carries fresh, often live prey, back to the chicks.

Other behavioral shots around the nest are obtained when the adult, carrying fresh food, interacts with the chicks at the nest entrance, as illustrated by the Olive-backed sunbird and two very enthusiastic chicks. Other woodpecker species such as the diminutive Sunda Woodpecker supplies its young with insects and their pupa, as illustrated.


The Common Flameback is a regurgitation feeder and the adult mostly goes inside the nest to bring up the food to feed the chicks, therefore it is less spectacular from an action photography viewpoint.

There appears to be only scant information on the nesting habits of this species. I had read the astute observations of Wong Chor Mun from Selangor who observed a nesting in 2007 with some friends.
As the eggs are unseen it was difficult to determine when egg-sitting ended and raising the chicks began as the frequency of the adults visits did not change a great deal. Two to three eggs are laid and the incubation period is 25-28 days. It takes about the same time until the chicks fledge. The pair that I observed  part time for four weeks had quite distinct patterns of behavior. The female would visit the nest tree 6-7 times in an hour and spent quite a lot of time in the decaying wood above the nest entrance.  She was an infrequent visitor to the actual nest. The male on the other hand would arrive in determined fashion around 3 times every two hours.  He usually landed on the opposite side from the entrance but quickly made his way to the cavity. He would then spend from 2-10 minutes inside and would often emerge carrying droppings to deposit elsewhere. Occasionally the adults would interact with each other around the nest entrance and would frequently call each other away from the nest.


I was mainly semi-hidden behind a tree or in long grass. Any movement in the open resulted in the departure of the adult although I observed they paid little attention to grass-cutters operating nearby. Other species passed by while I was waiting for more woodpecker action; Spectacled Leaf Monkeys rested on the suspension bridge, Common Iora flitted through the vegetation, Blue-winged Pitta called and Green-billed Malkoha explored the leaves or flew like slow arrows to a new destination.

The entrance hole was quite small and the adults had to squeeze through it when entering or leaving the hole. There would not be many predators that could fit through a small opening. Several times during my visits a Plantain Squirrel got close to the nest opening and was chased off by the male woodpecker.

When the chicks got older a male and a female could be seen just inside the nest opening and often a wide-open juvenile bill greeted the adult. The adults would often start the regurgitation process when approaching the hole. Both chicks take on the adult appearance at an early stage as there is no need for camouflage in a dark cavity.

The adults could be seen probing nooks and crannies in nearby trees when searching for insects. They approached the nesting tree or adjacent trees with the rapid and slight laboured undulating flight. There was no opportunity to get incoming flight shots as the adults usually appear from the foliage of adjacent trees.

I was present on 2nd July 2014 when the first chick fledged around 8.30am. The young male was having a very good look around at the outside world and occasionally calling to his parents. They replied from nearby. I had seen this type of behaviour with Bee-eaters trying to induce chicks to fledge. The adult male came to the nest and did not feed the chick, In response the chick was angry and appeared to snap at the adult. The adult male flew off and 15 seconds later the chick followed......mission accomplished. The nest cavity was quiet for the next hour and no feeding or chicks looking out occurred. I went to investigate elsewhere and when I returned another male chick appeared at the nest entrance.

Technical note;
For the Woodpecker shots I  used a tripod-mounted, Canon EOS 1DX with a Canon 800mm, f5.6 lens. The nest is around 6-7metres above ground level and with the appropriate angle of shooting the 800mm lens is best (a 500mm to 600mm with a converter would be fine). I always shoot on manual and require an f stop of f8-f9 to accommodate a reasonable depth of field. 1/100th sec is the slowest speed that wildlife should be exposed at......as there is always subtle movements. The most recent models of Canon and Nikon allow greater ISO speeds and I have mine set at ISO 2000 a lot. This enables speeds of 1/4000th second for flight shots in good light and respectable shots in bad light. The above nest was best shot in relatively poor light to avoid excessive contrast. The nearby Pittas are often in a fairly dark corner and the ISO speed advantage again prevails.  Incidentally the colours of the Pitta are best portrayed when the bird in shadow.