BEATING THE ODDS; The trials of Blue-throated Bee-eater nesting


Cavity nesters clearly have some advantages in raising their young underground but there are also a number of challenges they must face to fledge healthy chicks.
In one of my favorite photographic locations two species of Bee-eater and one kingfisher species nest in the ground. In this blog I will detail the challenges that one of these species; the Blue-throated Bee-eater has to overcome to propagate their species. Blue-throated Bee-eaters are not endemic to Peninsular Malaysia and several hundred birds arrive in mid-February to a Moto-cross track that occupies several acres of land to raise their chicks. Considerably less numbers of Chestnut-headed Bee-eaters and several pairs of White-throated kingfishers, all cavity nesters, also choose the same site to nest in. There are other similar open areas in the vicinity where different pairs of Kingfisher choose to nest but the Bee-eaters single-mindedly prefer this arena.

The Breeding Cycle
This has been detailed in a previous blog but can be summarized as follows; the adults arrive in pristine condition from the North and are already paired off.  They spend some time settling in and hunting for flying insects before they excavate their nest cavities, which are either in banks or on the flat ground. Mating occurs shortly after or during hole-drilling. Mating occurs after the female assumes a ‘mount me’ posture adjacent to her partner. The eggs are laid and incubation takes approximately 28 days. 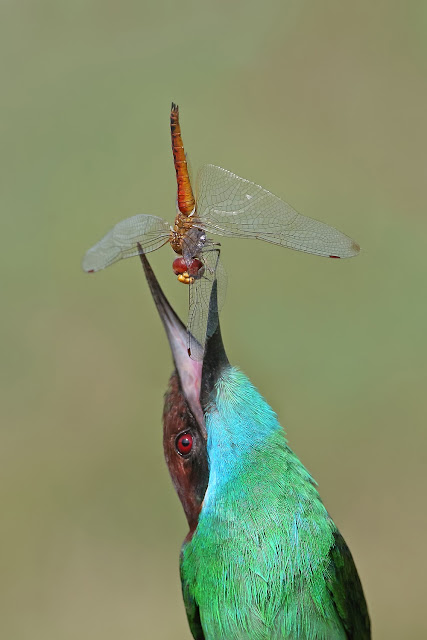 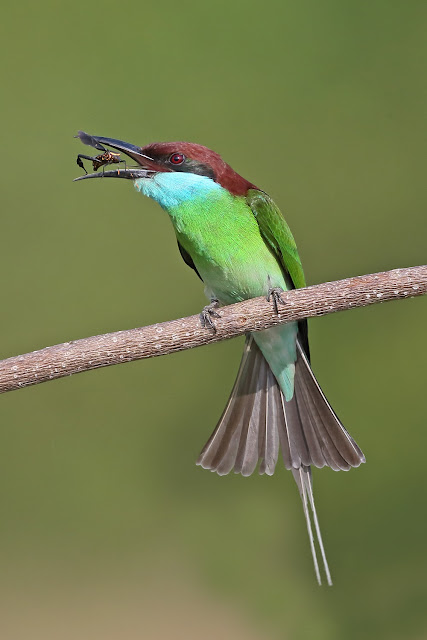 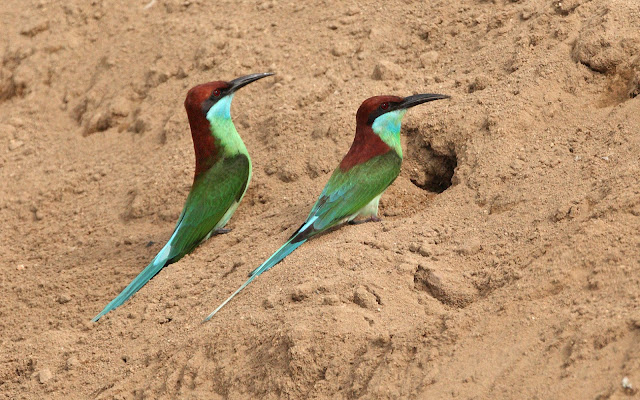 The parents, non-breeding uncles and aunties plus adolescents from the previous nesting feed the current latest brood. Current evidence suggests that there might be back-to-back nesting with the chicks from the first brood assisting in the feeding of their younger brothers and sisters. The chicks fledge around 28 days after hatching. They are a similar size to the parents but have a dark green head, a blue-green throat and mainly green back feathers. The elongated tail feathers are absent also at this stage.


There are a number of external forces the nesting process has to survive for healthy chicks to emerge from under the ground. They are as follows;
Parasites
Nesting in cavities in the soil, which is sometimes damp, is ideal for various parasites to flourish. The Bee-eaters spend a considerable time preening and often adopt rather goofy postures in in full sunlight. This is apparently to bring the parasites to the surface on their feathers so that they can be more readily removed.


Termites live underground and can sometimes choose to occupy the same cavity as the chicks. Twice I have seen chicks leave the nest cavity prematurely when driven out by termite infestation.
Cows. In Malaysia landless owners drive small groups of cows into favorable grazing grounds. The cows can trample hole entrances and drop excrement in unfortunate places. 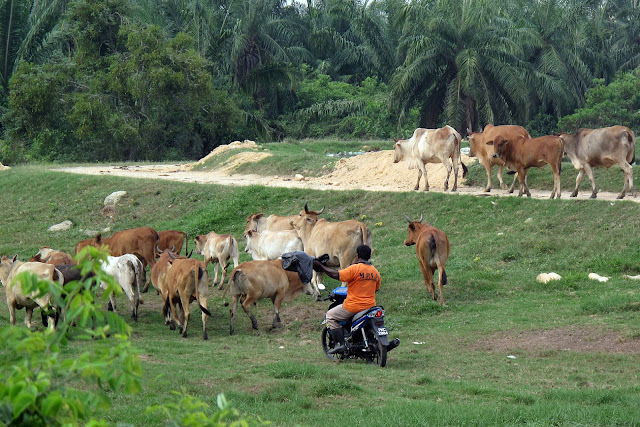 Wild Boars. I have seen a family of 8 wild boars in the nesting arena and evidence of their trampling and surface excavations is often observed in and around active nests.

Raptors. The area appears to be rich in raptors. Crested Serpent eagles; Brahminy Kites and Changeable Hawk-eagles often fly by and occasionally swoop on a target in the nesting arena. Perched Bee-eaters however have a good selective surveillance and take to the air if threatened.

Snakes. Snakes are terrestrial hunters and must represent a constant and major threat to young chicks confined within nesting cavities.

Dogs. Wild or semi-wild dogs are fairly ubiquitous in many areas in Malaysia and indeed Singapore. They are not a direct threat to the birds but can randomly excavate large holes in nesting areas.
Intra- and extra-species disputes.
There is competition for nesting and perching sites and intra-species squabbles occur. The resident Kingfishers are mainly tolerant of the Bee-eater multitude but occasionally fly aggressive sorties to clear an area of foreign species.


Humans. The main threats to many bird species are humans and their activities. In the case of the Blue-throated Bee-eaters nesting in the described area most of the human activity that is a threat to successful nesting is done in complete ignorance of the presence or status of the bee-eaters.
Bird Poachers. On several occasions illegal poaching has been seen to take place in the nesting arena. The Bee-eaters appear not to be the targets but may suffer collateral damage from traps and snares. 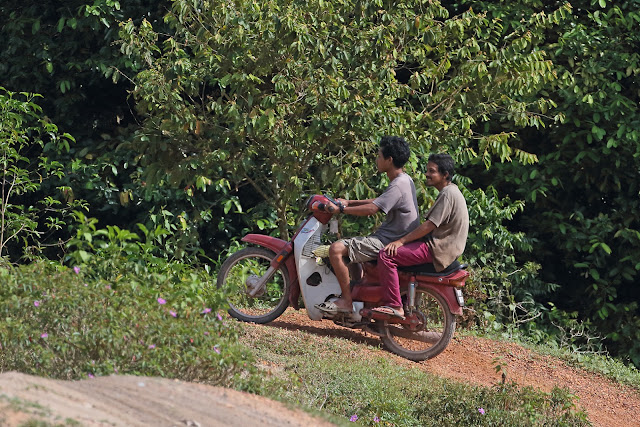 Moto-cross riders. The track has been active for over a decade and the riders have every right to be doing what they do as the area was modified and set aside for their chosen activity. I have spoken to several riders and they have seen holes but are unaware of what avian species or process has constructed them. Recently the track has been renovated and this has caused problems when nest active nest holes have been completely buried. Sadly one adult arrived with cargo and found the nest entrance had vanished. It spent the next few hours desperately digging to locate the chicks. 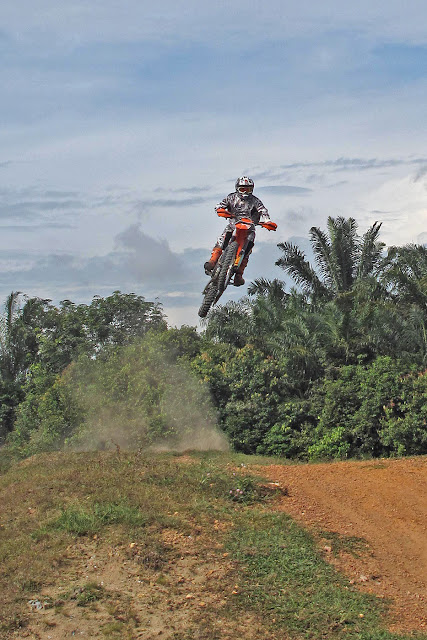 Radio-controlled cars. For a period of time some young men had races with scale model, petrol-powered and radio-controlled cars that were whizzed around the motor-cross track and adjacent areas.
Local Youths. The area is a large playground to a small number of local boys who ride their bicycles over the bumps and across the pasture.
Turf-cutters. There is a small industry whereby turf from grassy fields is cut for grassing the verges of highways and byways. The turf is cut with a specialized hoe and the cutters stack the clods in piles awaiting pick-up by small trucks. Sometimes the piles are laid directly on top on active nests.

Re-development. Although this has not currently occurred is a constant threat. The adjacent land has just had a large factory constructed on it and there is an advancing phalanx of new houses not far away heading in the direction of the nesting site. The greatest hope of survival of this unique area is for the moto-cross riders and current owner to maintain the status quo.

Despite the trials and tribulations of cavity nesting it is heart-warming to see chicks actually fly out of nest holes after a quick glance at their new world. More interestingly in recent weeks I have reason to believe that the parents that successfully raise an early brood do a repeat nesting. Late nests have been seen to be fed by birds that have mainly green heads and other indications of an early stage of transition to the adult coloration. In essence the second batch of chicks are being fed by their brothers and sisters. This is a further indication that despite outside forces successful parent are prepared to raise a second brood in the same location. 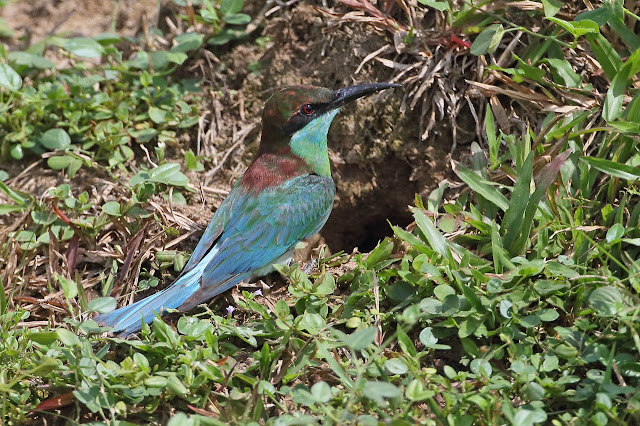