The Nature of Fraser's Hill; Introduction and Birds

The purpose of this blog is to give a current and forthright account of the wildlife haven that is Fraser's Hill (Bukit Fraser). Written in March 2013. We hope it helps naturalists and photographers


History.
Fraser’s Hill is named after a Scotsman, Louis James Fraser who was a prospector and dubious businessman. In the 1890s, After an unsuccessful stint in the goldfields of Australia Fraser set out to investigate the upper reaches of the Titiwangsa Range in Pahang State. He found some iron ore deposits on the current site of the centrally located golf course. Fraser recruited Chinese workers and a steep track was constructed to transport the tin ore down to the Gap and then to Raub, the nearest town. To supplement his income, and recycle his workers wages Fraser operated a gambling and opium den at the workers’ camp. Fraser disappeared without trace 25 years later.  In 1917 the Bishop of Singapore, C.J. Ferguson-Davie led an expedition to The Gap to look for Fraser’s site but did not find it but reported the place was perfect for a hill station retreat from the heat of the lowlands. In 1919 a road was started from the Hill station to The Gap and Fraser’s Hill was opened to visitors in 1922. The hill station covered 140 hectares of land and had/has over 50km of jungle paths.

There was further large-scale development in the 1970 with buildings and golf courses. There is the current golf course and another 18-hole course near the entrance to the Waterfall area (now overgrown with vegetation). The Sultans of all the Malaysian States have residences there as well as the Singapore Government and a number of companies also built mansions. Many buildings were built with stone with is highly durable but the whole area appears to be in a decline and so do the once-solid buildings

I have been visiting Fraser’s Hill yearly for the last 15 years and have noticed oscillating trends between decay and patchy redevelopment. It appears that investment money cannot keep the whole area maintained. The gardens around the town centre and hawker centre/playground are generally well-maintained. There are around 1500 permanent residents and the weekends see the arrival of some holiday-makers and day-trippers. Mostly during the week the whole area is quiet. The Pahang state government has sensibly ruled out further encroachment into the surrounding virgin forest having seen the damage caused in Cameron Highlands.
The recent addition of a four million Ringgit plus Floral display is however questionable given the poor state of repair of many of the Hill Station roads and other facilities that need upgrading.

Location and weather
GPS Location:   N 3 42.755  E 101 44.145
The resort is situated 64.6mils (104km) from the capital city, Kuala Lumpur. There are seven peaks in the resort with altitudes between 1,220 and 1,524 meters above sea level. The temperatures vary between 17-25 deg C (63-77deg F). At the foot of a steep ascent at an altitude of 800m, is the Gap, where a colonial resthouse is in a sad state of disrepair.
One road from the Gap (the old road) is currently for ascending traffic while another longer (the new road) and slip-prone road is for descending traffic. 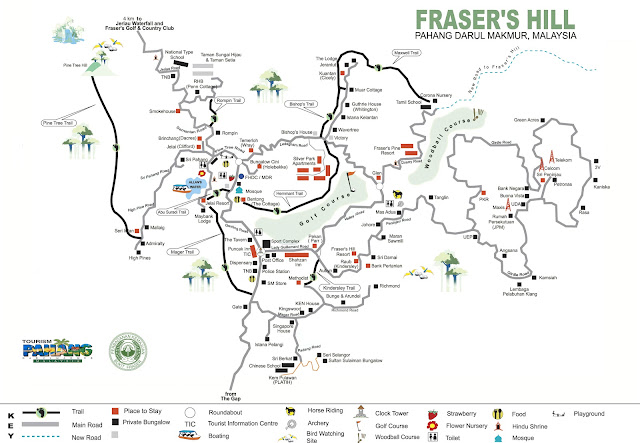 The weather is essentially similar all year round but the unpredictable rainfall increases with the North-east monsoon from November to January.

Access from North or South is via Kuala Kubu Bahru (KKB) from where you soon connect to Highway 55 that takes you to The Gap. You should fill your car with petrol at KKB because there are no garages at Fraser's Hill. Getting to KKB takes 4-5 hours from Penang and 6 plus hours from Singapore.....with the majority of the journey on excellent highways.

Sadly the first two on the list, and the largest are in a sad state of disrepair and poorly maintained.
The Jelai was very popular with birders but is also closed and in a poor state of repair. The Puncak Inn was recently refurbished after reaching a poor state of repair. The Smokehouse is operating and is in a nice location for a quiet outside drink in the evening. The Shahzan Inn is quite well maintained and has rooms at reasonable rates.

I visited Fraser’s Hill in February 2013 and there were a number of foreign visitors seeking images of the birdlife. It is a pity the accommodation was not generally better managed to create a better impression of Malaysian nature parks.

Recreational activities
I love the refreshing atmosphere of Fraser’s Hill and it is a great place to rest and relax, as was the original intention. There is still a nine-hole golf course, some riding stables and many walking tracks but I wish to comment on the nature and nature photography.

For nature aficionados I will split the nature section into;
Birds,
Mammals,
Flora and
Insects  (macro photography)


Bird watching and photography.
One of best birdwatching places in Asia

Equipment
Serious bird photographers need a prosumer digital camera that is capable of noiseless high ISO settings (usually the latest models) plus at 500 or 600mm prime lens usually with a 1.4x converter. A steady tripod preferably with a gimbal head is necessary and an attached flash, once considered necessary is an optional extra for fill flash. Some photography is possibly from a vehicle, which is a good mobile hide. The best tactic is to remain in a likely place and see what comes along rather than constantly moving.

I have always said Fraser’s Hill is a birdwatchers paradise but more difficult for bird photographers. The Hill Station has over 270 species of local and migratory birds. In the second week of June each year there is an annual International Bird race organized by Fraser’s Hill Development Corporation with WWF-Malaysia and the Malaysian Nature Society. Birders or bird photographers should arm themselves with Morten Strange’s ‘Birds of Fraser’s Hill’. In this book there are details of what places are best to see and photograph birds. It is slightly out-dated (2004) but still essential for the backpack. The list of species is somewhat different at The Gap and the resort area. It is not my intention to reiterate the details but give some advice on getting clean shots and where prime locations are.
Bird photography is somewhat difficult in the jungle fringes at Fraser’s Hill. For periods it is very quiet and then a bird wave, consisting of mixed species, will pass by composed of mainly hyperactive targets. Luring the birds into the open has become a side industry with mealworms and recorded calling being employed to this end. Both should be used sparingly and intelligently if at all.
The best month for bird activity are March and April where nesting is at its peak.

It is best to identify good perches with associated unobtrusive backgrounds before the activity reaches a peak. The light can be variable with the sun having to negotiate the surrounding hills and mist comes and goes frequently. The best time to shoot is from 7.30am until 9.30am. There are a number of resident species that are relatively common; Mountain Imperial Pigeon, Red-bearded Bee-eater, Fire-tufted barbet, Grey-chinned Minivet, Orange-bellied Leafbird, Lesser Raquet-tailed Drongo, Black and Crimson Oriole, Chestnut-capped Laughingthrush, Chestnut-crowned Laughingthrush, Silver-eared Mesia, Blue-winged Minla, Mountain Fulvetta, Long-tailed Sibia, Oriental Magpie Robin, Yellow-bellied Warbler, Mountain Tailorbird, Verditer Flycatcher, Mugimaki Flycatcher, Little Pied Flycatcher, Large Niltava, White-throated Fantail, Black-throated Sunbird, Streaked Spiderhunter and a several colourful birds that lurk in the area but show themselves infrequently; Green Magpie and Sultan Tit.. The fate of the hotel is currently in the balance and I hope any future development will take into account this unique birding location.

Fruiting Trees.
One of the best locations for photographic potential is to locate a fruiting tree. There are a number of Barbet species that will gorge themselves and generally sit around in the vicinity.

Jeriau Waterfall area.
The drive down to the waterfall area may provide photographic opportunities. The river is waterfall are in pleasant bush that is generally well preserved and maintained but there is an overabundance of concrete building littering the watercourse. For photographers it is best to go there on a weekday to avoid swimmers and day-trippers. Some good shots have been taken at the is location; Various Bulbul species, Streaked Spider hunters, Silver-breasted broadbills, Orange-breasted and Red-headed Trogons, Orange-bellied leafbirds, Grey Wagtails, Slatey-backed Forktails and Asian Fairy Bluebirds

These include;
The Gap and Highway 55
Telecom Loop
Around the playground
The road to Richmond House
The 'new' road....this is better when closed by slips
Hemmant Trail (some trails are not good for carrying heavy gear)
The 'old' road (beware of cars)
Bishops trail
High Pines